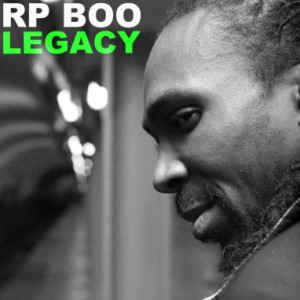 In many music scenes it’s possible to make the distinction between originators and popularisers. The originators have the ideas – in a simplistic reading, they are the authors of the style at hand – but they fall short in other respects: presentation, communication, plain old organisation. This is where the popularisers come in. They don’t invent so much as refine, but in doing so they bridge the gap between that which is already accepted and the tantalising but alien potential of The New Thing. Just look at the way Skream took the dark, austere garage template of Horsepower Productions et al and turned it into something with massive appeal.

DJ Rashad is arguably footwork’s populariser, pursuing an increasingly refined, outward-facing sound that resonates with the Chicago style’s growing global audience. His long-term running mate Kavain Space – aka RP Boo – is its originator. This is to be taken quite literally: Space is credited with pioneering the high-octane rhythmic refractions of juke that would come to define footwork with his 1997 track ‘Baby Come On’. But even beyond the bare facts, Space has all the trappings of an archetypal originator. He is an eccentric figure who stands outside of the Chicago scene’s rigid clique rivalries (as Planet Mu founder Mike Paradinas has said, “everyone says everyone else outside [their clique] is shit, pretty much, apart from RP Boo”), and is still very much a presence on the scene some two decades after first trying his hand at production. And yet he has often struggled to capitalise on footwork’s success, finding himself either exploited by those of a more ruthless disposition (as detailed here) or, in the case of the style’s recent global explosion, simply passed up for the producers who, one imagines, had an album’s worth of material ready to go and the chutzpah to make things happen.

It’s good news, then, that Space is finally getting his moment in the sun with Legacy, a collection of 14 tracks from the last decade of RP Boo output. Of course, both originators and popularisers have their place. But while Rashad has set about proving that footwork can have a global outlook – and very successfully, too – the tracks contained on Legacy seem the best possible embodiment of the hermetic, hyper-competitive world from which the style sprang. In fact, Space’s music is odd even by those standards – a counterpoint to the heritage-steeped output of fellow former Dance Mania affiliate Traxman. While both often draw from the same sources – pulpy B-Movie soundtracks and dialogue, instrumental jazz, dislocated divas – the way Space strings these samples together is singularly stark and surreal. RP Boo productions exist for the striplit world of the dance battle, and it’s the extreme specificity of their intended context that makes them so fascinating.

Legacy’s most obviously rewarding moments, then, are when Space pushes this alien thrill to its limit. ‘The Opponent’ and ‘Speakers R-4 (Sounds)’ are both highly distilled beat work-outs, sporting rhythms so asymmetrical that pinpointing where the downbeat falls is like trying to find the seam on a roll of sellotape. ‘Steamidity’ and ‘Invisibu Boogie!’, meanwhile, thrive on the interplay between languid halftime and twitchy double time; a dichotomy present in much footwork but rarely executed with such spartan flair. Space ventures into straighter four-four territory on occasion, too: with considerable success on the oddly jaunty ‘Robotbutizm’; less so in ‘Red Hot’ and ‘There U’Go Boi’, where a layer-on-layer approach to arrangement risks clouding the vivid weirdness of the initial ideas. But weightlessness is undoubtedly Space’s strongest suit – a fact best represented by closer ‘Area 72’, whose sampled breakdown seems to run at a different tempo to the pointillist percussion work going on up top, to oddly meditative effect.

In all cases this is combative music, its sounds – particularly those excoriating snares and claps – designed to assault the senses rather than caress them. But while that makes this record a fatiguing listen in places, it also means that the few fleeting moments of softness are all the more striking. ‘Sentimental’ is a particular highlight, its slushy Quiet Storm-style sample re-pitched and fractured into a marvellous stumbling beat, woody tomtom hits and hihats flying every which way. RP Boo’s music is not exactly an easy sell, but in a just world Legacy would be the moment when he begins to get the recognition he deserves.