View at your own risk: the Chief Keef fan tattoo that will haunt your dreams 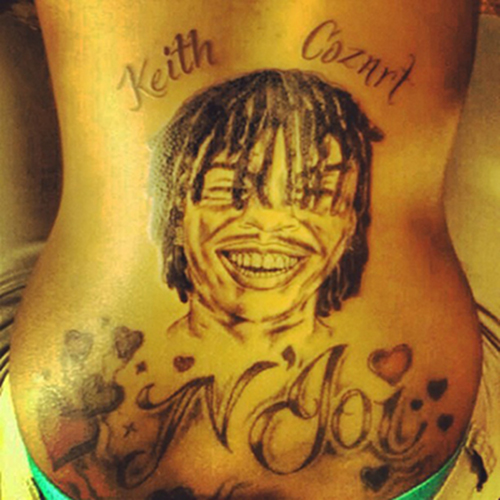 Continuing our hard-hitting investigation into the tawdry world of catastrophic fan body art.

For a few months about a year ago, you couldn’t move for terrible fanboy tats and trims: the girl with the Skrillex chest ink, the man with the Drake-fro, and Yelawolf’s supremely ill-advised Johnny and June Cash tribute all indelibly etched onto our brains. Then, after a lull, came the worst of the bunch: step forward the Thom Yorke nipple tattoo.

The latest tat-rocity comes to our attention via drill anti-hero Chief Keef’s Twitter account (which, after that infamous blowie image, has become a go-to for eye-melting images). The rapper posted an image of a fan’s full-back Chief Keef tattoo, rather awkwardly headed with his birth name Keith Cozart. We’re not sure how to best describe the image in mere words: a cross between Lando Calrissian and an incubus? Rick James doing an impression of a gremlin? A chiuhaha being gobbled by an Ood? View the image above, then have a lie-down. [via Complex]