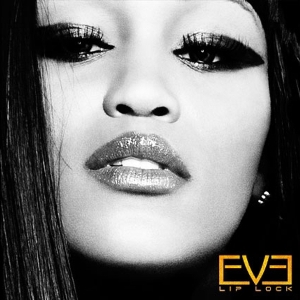 Available on: From the Rib LP

Eleven years since Eve-Olution Eve returns with Lip Lock, her mere fourth album since 1999 and what the Philly-born Ruff Ryder has called her most honest work to date. After Interscope repeatedly delayed, then shelved her last full-length Here I Am, Lip Lock presents itself not as the remnants of what Here I Am once was but a well-executed reminder of what Eve always has been – a rapper who strides through the ever-shifting pop landscape with enviable ease. Regular collaborator Saleem Remi even mined a Benga production back in 2009 for hot-mess banger ‘Me N My’ which didn’t see an official release, yet attested to her willingness to experiment in a way that pre-dates the current crop of urban artists marching towards the EDM Eye of Sauron, knuckles dragging all the way.

Lip Lock is exactly the kind of pop album that rappers set on crossover success should be making. Granted, ‘Make It Out This Town’ is little more than prime-time radio filler which does an injustice to Eve’s testimony of overcoming struggle, and the Swizz Beatz and Missy Elliot-produced efforts ‘Mama In The Kitchen’ and ‘Wanna Be’ are disappointingly lacklustre, but the majority of the album is compensation enough. The glottal bass line of opener ‘Eve’ jump-starts her story of reaffirmation alongside a powerful kick drum and “E-V-E” mantra, ‘All Night’ is sheer infectious pop with bursts of brass and warm undercurrents of guitar strums and sub-bass, and ‘Keep Me From You’ balances out shoulder-popping hand claps with former Dirty Money singer Dawn Richard’s euphoric hooks as the flip-side to Eve’s rapid-fire verses. It all serves as a bubbling warm up to the excellent ‘Grind Or Die’; a Diplo daydream where Eve walks her lyrical red bottoms through a murder scene of naysayers: “I’m sitting pretty, haute couture culture / But don’t doubt me, I’m a pure bred hustler.”

Coming just over half way through Lip Lock, this line encapsulates the whole message and timing of the album, and as the breathy ‘Zero Below’ unfurls it feels as if Eve has penned a ying to Rihanna’s Rated R‘s yang; the macabre, sensual tour-de-force that showed just how versatile modern r’n’b has become. Lip Lock is a joyous hybrid of pon-di-floor riddims, auto-tuned r’n’b and summery pop jams centred by Eve’s likeable boss bitch persona – a facet of her that shouldn’t be underestimated. She may not be the First Lady with a bleached crew cut, Timberland boots and steely gaze anymore, but Eve has retained that original attitude whilst reshaping her sound from diamond in the ruff to 24 carat show-stopper without the various crises of confidence that often fuels rap comeback albums of this ilk.

Eve doesn’t dwell on the past with underhand bitterness or glassy-eyed nostalgia. Considering it’s been eleven years, there’s a pointedly absent element of story-telling about her hiatus which leaves the listener wanting more, yet Eve was never held up as a great lyricist and can’t really be bashed for not being one now. That’s not where her appeal lies. For all her success in commercial rap Eve is first and foremost a singer. It’s the fluidity of her appeal that she’s most keenly aware of, and this gets a triumphant finale on the remix of first single ‘She Bad Bad’ featuring Pusha T and Juicy J. As the three fellow comeback success stories stand side by side like this over what is certainly the album’s most intense beat, even I feel smug listening to it. Eve is back, and she barely broke a sweat.