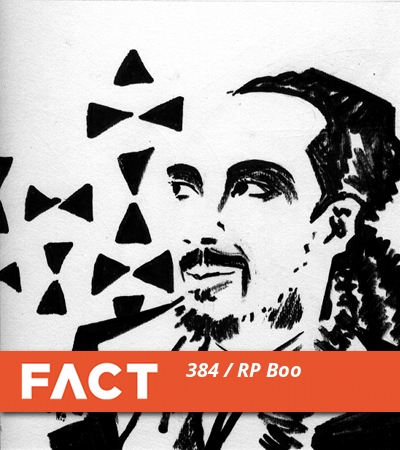 This week’s FACT mix comes from RP Boo, the man credited – by most, these days – with originating the footwork style popularised by DJ Rashad, Spinn et al.

As Boo, often stylised as Arpebu on his old mixtapes, explained to FACT in a recent in-depth interview, the game-changing 11-47-99′ – usually simply known as the ‘Godzilla track’ – has often been credited to DJ Slugo, who Boo originally wrote the track for. “The track took off”, recalls Boo, “but I never knew about it – Slugo never gave me the reports on how things were going. All that time, he was taking the credit for it – I found out through two of his buddies, like, “Do you realize your Godzilla track is making a lot of noise in Detroit?”. It was travelling across the waters, I had no idea this was going on, I wasn’t gettin’ paid any money.”

Boo eventually received the credit he deserves, and is royalty in the footwork city of Chicago – as Mike Paradinas, whose Planet Mu label has been vital in spreading the footwork bug abroad, explains, “everyone [in Chicago] says everyone else outside [their clique] is shit, pretty much, apart from RP Boo”. Mu recently compiled Boo’s greatest hits on a new full-length, Legacy.

Boo’s FACT mix is the perfect accompaniment to Legacy, showcasing his ear for hooks and peerless ripples of drums across 18 of his own tracks, with cuts from Rashad (it opens on his fantastic edit of Outkast’s ‘Spottieottiedopaliscious’), Spinn, Traxman and DJ Clent also making appearances.