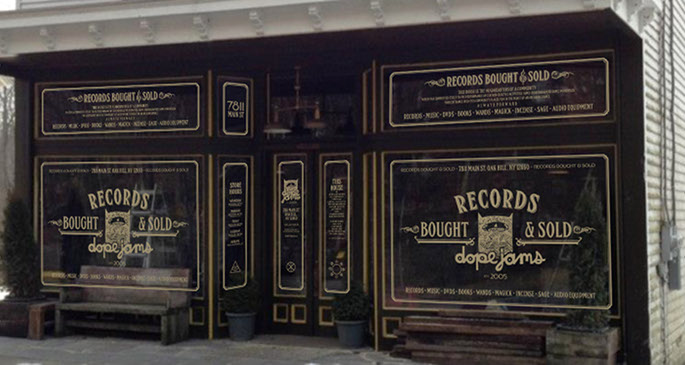 Originally based in Brooklyn, Dope Jams may have become as notorious for its uncompromising descriptions of records – a trait that prompted the ire of Jus-Ed, amongst others – as its selection, but the experience of shopping in it, for many, will never be matched. Writing in FACT after the store announced its closure this January, Tim Purdom recalled his first time there:

Amusing, refreshing and thrilling as we found these devil-may-care disses to be, it also meant we felt a little intimidated. We were, after all, young house enthusiasts, and definitely not experts. Surely we would be torn apart by the store’s prickly staff. Yet the guy behind the counter that day – whether it was Francis Englehardt, Paul Nickerson or one of their other employees I really can’t recall – was perfectly pleasant, and when my more gregarious friend asked his opinion on Kai Alce, the withering insights he offered in response were entirely good-natured. Perhaps we were just lucky. After much happy browsing and listening, we left with about 20 records between us, all of them good, all of them things I still stand by and dig out today. It remains one of my most memorable and satisfying ever visits to a record shop.

After closing, Dope Jams continued to trade as a mail-order venture, but on May 1 announced that it would open a new store in upstate New York’s Oak Hill – a location significantly further from the centre than their old home of Brooklyn.

Speaking to FACT about their new location, Paul Nickerson claims – in typical Dope Jams fashion – that they are now “focusing more on fishing lures and bear deterrents then Sandwell District and Pittsburgh Track Authority 12″s. We are also on the hunt for a counter person with the same charming personality as Randolph “Happy” Delgado. We shall continue to maintain our stance as a business rooted solely in the support of Authorized releases. 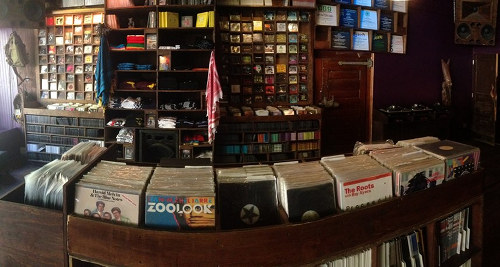 “I don’t think in either location we were beating customers away with a stick (wand)”, Nickerson continues. “We are however extremely resourceful, we have just run a zip line from the local gun shop to the old country store and also are exporting Maple syrup to Sweden, we are finding unexpected success in both. We have had to scale down the mail order due to the fact that the closest post office is 80 miles away but are going to be raising mules to expedite things in the near future.

“We have begun to establish a nucleus of lunatics and are finding that to be easier then anticipated. I wish we could talk more but we need to go attend to the bee hive and check that the pigs are safe from Herbert’s sickle.”

Dope Jams – it’s good to have you back. You can check pictures of the new Dope Jams store above, and download a recording of Slow to Speak’s – a.k.a. Francis Englehardt and Paul Nickerson – set from the closing party of their Brooklyn store below. For those eager to hear more, Slow to Speak also contributed a FACT mix last year.