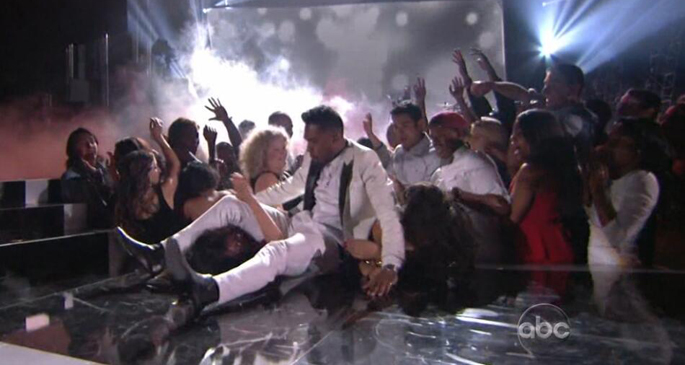 Let my leg adorn you.

Things haven’t been quite the same for R&B star Miguel since his unfortunately misjudged jump at the Billboard Awards on May 19. Instead of vaulting cleanly from one part of the stage to the next, Miguel accidentally leg-dropped fan Khyati Shah and since then has had a hard time simply walking away from the incident.

At the time, Miguel managed to continue the show relatively un-phased by what looked like a painful fall, but it’s obvious from the video footage that Shah was not doing so well as she instantly collapsed. Straight after, the singer greeted his fan to check everything was alright and the two did an interview together, with Miguel saying “Well, I think it’s kind of clear what happened, but I’m very happy to bring my new friend, Khyati, we just met. Unfortunately we did not meet under the best circumstances, but I think we’re okay.”

It wasn’t long after this however that the memes started appearing, and the world’s reactions started flooding in. The most unexpected reaction for us was probably one from legendary wrestler Hulk Hogan, who added this pearl of wisdom to the flood of Twitter responses: “MIGUELAMANIA at least he did it right brother. HH”.

Miguel himself was keen to highlight the funny side of the incident, and in an interview with BBC 1Xtra’s Charlie Sloth while he assured Sloth that first and foremost he needed to know whether Shah was OK, he ended up freestyling “All we got is time / Please do not confine / You’re all mine / Leg drop.”

So at this point it should be all over then, but not long after the incident, Khayati Shah changed her stance and hired lawyer Vip Bhola to represent her. Asked whether he was considering a lawsuit, Bhola immediately stated “We will determine that after we have feedback from medical providers,”.

Today that feedback was explained to TMZ, and Bhola has stated that his client experienced serious head trauma, and symptoms consistent with brain damage. Bhola was vague on the exact evidence of this but said “Some of the difficulties she’s experiencing are cognitive in nature and lead to suspicion of a neurological head injury.”

It appears that his main grievance is with the reaction to the incident at the time, when Shah was simply handed an ice pack rather than rushed to hospital to investigate the trauma. Bhola ended his statement by saying that whether or not there will indeed be a lawsuit would be decided by a neurologist’s verdict, which should arrive some time next week.