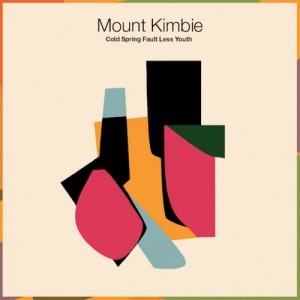 Having spent the 10 ten years or so rearranging the focus of their roster, it comes as no surprise that Warp picked up Mount Kimbie for their second album Cold Spring Fault Less Youth. While the duo’s previous records on Hotflush may have been a leftfield interpretation of the 2008 watershed of UK dance music, Warp probably picked up on the duo’s live shows as a band mixing electronics and live instruments, as it squares completely with their own revised focus.

Predictably, this has now taken a larger role, possessing a wider use of instruments than previous releases, and the increased production budget has lead to something far denser sonically than Mount Kimbie have released to date. The result is a bit of a mixture between earlier Mount Kimbie’s floating output and, perhaps, Lukid (or more specifically his Arclight project with Simon Lord), and Godspeed You! Black Emperor or Le Fly Pan Am being produced by Los Angeles-era Flying Lotus.

Obviously taking full advantage of expanded resources, Cold Spring is very well constructed and curated, showcasing a wide range of approaches. The pair also display confidence in experimenting, the inclusion of King Krule on two tracks for his bleak, rowdy deliveries particularly unexpected, or the strangely cloudy ‘non-dance’ of ‘Made To Stray’. New synth voicings are also particularly welcome, such as ‘Break Well’’s introductory flutterings and ‘Blood and Form’’s GLUM Records-like low end.

The increased thickness of their newer production lends itself well to the minimal material of the album’s highlight, the ghostly, extremely tense ‘Sullen Ground’, and FlyLo-esque ‘Lie Near’. Unfortunately, the 2010 trademarks of pallid, organ-like tones on the harmonies and ‘jazzy’ synth licks (please, no more, I’m begging you) do recur, but this was always going to happen.

This does raise what I think is a pertinent question, though. Crooks and Lovers, their debut LP, was a brilliant record for putting this musical language into context, and perhaps this was due to being released at a particularly nascent time, but I would also factor in the sheer restriction of what it was exploring. As someone who wasn’t a fan of the style, I could still enjoy the album. So would recording more live instruments and working in a professional studio add anything to actually further this music, or would it serve to limit them to a set of overly familiar colours?

Or, more bluntly, do we want Mount Kimbie to be some kind of amorphous ‘indie-tronica’ band?

If you’d asked me in 2010, I’d have said no, they’ve got the balance right. And I still think this, because Cold Spring so fully confirms many of the expectations I had. However, they certainly deserve credit for what they’ve achieved, because it’s certainly no Difficult Second Album either. As a kind of inversion to Crooks and Lovers, Mount Kimbie do seem to be flourishing. It’s just a shame that it’s towards a direction that could ultimately reduce their individuality, rather than enhance it.