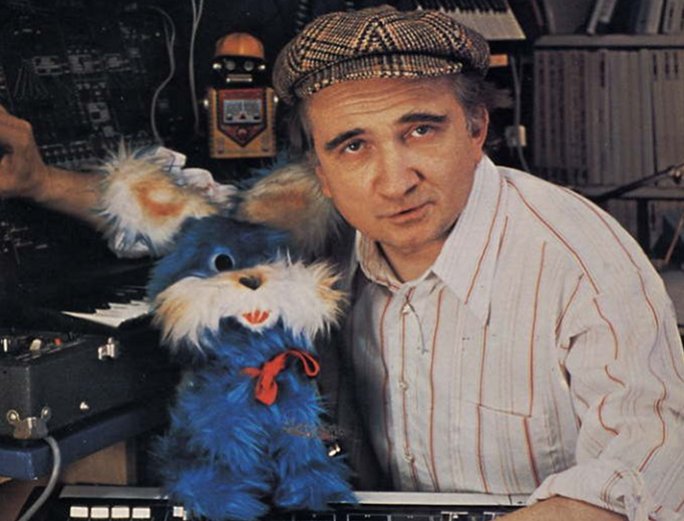 Proceedings kick off with the Musique Tachiste LP (1959) from Michel Magne (pictured above), a “part radical manifesto, part pantomime” touted by the label as one of the first French concept albums; veering from dolorous piano and violin compositions through to middens of found sound, it’s a commendably off-kilter opening act in the Cacophonic story.

They’ve also issued a three-track collection from Belgian composer and Stockhausen associate Karel Goeyvaerts, responsible for early experiments combining sine wave generators with instrumental ensembles, plus a classic performance work from inimitable outsider composer/instrument inventor Harry Partch. Cacophonic might have an unfortunate catalogue number (CACK01, anyone?), but it’s a genuinely exciting enterprise from one of our finest archivists. We got in touch with Votel to get the skinny on Finders Keepers’ new “alternate universe.”

“Many of these records are from a jazz background but veer in to other disciplines like ballet and fine art.”

What was the rationale behind launching the Cacophonic label?

A free-jazz or noise label has been something that we wanted to do from the outset and as a result we have had a stockpile of early experimental records that we always considered too risky to release when we started Finders Keepers almost a decade ago. There has almost been an imaginary label within FK which could have only existed in an alternative universe where populist music didn’t exist and the rules were totally different, like something from a sci-fi novel. What has been very exciting within the last couple of years is that this fantasy has become reality and it seems that people are listening to music without any pre-conceptions or genre influence. The FK audience is very inspiring and demanding, which is what drives us to keep releasing challenging music. When people have been buying physical music for a long time they often strive for records that are unlike anything else in there collection – people don’t have physical room for doppelgangers so this is where Cacophonic fits in. Virtually all the records scheduled for Cacophonic are by artists that genuinely wanted to change how music was heard and made which is why a lot of them are specific to unique or homemade instruments which coincide with the introduction of electronic music before it went microscopic and less tangible. Many of these records are from a jazz background but veer in to other disciplines like ballet and fine art which were some of the most vibrant outlets for experimental music before the rise of rock and pop culture.

What can we expect in particular from Cacophonic releases, as opposed to regular Finders Keepers discs?

Naturally the labels share a lot of the same principles, although Finders Keepers is still very committed to misplaced pop and how the existing pop format was interpreted and perverted globally in the 1970s and 80s. Finders Keepers celebrates how pop failures become critical triumphs which is something very close to our hearts and translates well to DJing and cinematic applications. Cacophonic comes from a place before pop exists by artists who wanted to change the world and genuinely believed they could.

What are the first releases on the imprint, and why did you choose them?

Michel Magnes’ Musique Taschiste is a record which in title is directly derived from an art movement. It is also a direct humorous comment against Musique Concrete which I find interesting given that ‘concrete’ has become such a misused buzzword for people working in the digital domain. I adore ‘tape music’ as an art form but I also think it took people like the Radiophonic Workshop and Jean-Jacques Perry to take it to a logical progression… On this record Magne, who went on to own one of the most important studios in Europe, makes comments against academic music by using human noise and domestic elements into his orchestral palette.  This is a great counterpart to the Jean Claude Vannier record that began Finders Keepers but was released 10 years earlier using jazz instead of psych rock as its vessel. Understandably Magne was Vannier’s first employer.

The Goeyvaerts record is from a label in Belgium called Alpha with whom we met up with about five years ago when looking for original copies of Belgian electronic records from the IPEM psycho-accoustic society in Brussels. This record is another example of a composer primarily working in the electronic domain but using real instruments to create music that sounds almost robotic and syncopated using ancient instruments over the course of a long meditative 25 minutes.

Alongside Lasry-Bachet from Paris, American composer Harry Partch is basically an absolute maverick in the field of homemade instruments and his The Bewitched record is probably our favourite example of his use of his ‘inventions’ in the realms of experimental dance. The witchcraft subject matter also has great visual aesthetic values which is very important to the label. Harry Partch is as good as a household name for experimental music enthusiasts, but through Cacophonic we are proud to release an exact facsimile of the rarest vinyl version of the record complete with the original booklet and wonderful artwork which came out on his own Gate 5 Records label.

What Cacophonic releases are in the pipeline?

We have a lot of records by other artists using home made instruments, early electronic records, art installations ballet music, and a lot of free jazz records from France, Poland and beyond. As well as some compilations curated by existing Finders Keepers artists that have 50 years of record collecting behind them – because many of the artists on Finders Keepers have become close friends we are inadvertently inspired by their original influences, which leads to us digging deeper than we ever imagined possible. DJs and crate diggers are not the only people to have great record collections.