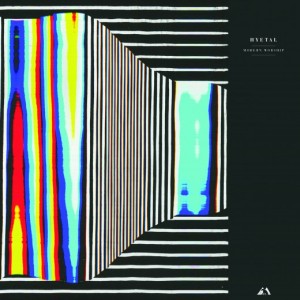 I’ve often thought of David Corney, aka Hyetal, as part of the second tier of Bristol producers: a worthy participant in the city’s fertile scene who never really achieved the wider acclaim of some of his peers. On his emergence in 2009, Corney’s use of playful videogame melodics in a dubstep context suggested a loose affiliation with the likes of Joker and Gemmy. But Corney’s left-of-centre take on the form didn’t elicit a (purple) wow so much as a whimper, his productions often displaying an intriguingly forlorn, downcast quality.

In the years since, Corney made more of a splash with tongue-in-cheek synth-boogie project Velour, a collaboration with Julio Bashmore. In his solo work, meanwhile, the decline of Bristol’s dubstep scene seemed to free the producer up to pursue his own muse. 2011’s Broadcast LP saw him largely abandon the dancefloor in favour of a range of moody synth-pop flavours, drawing inspiration from cult synth soundtracks and kosmische, and making only vague allusions to his dubstep past. It was a shift not dissimilar from that made by Kuedo at a similar time, and while Broadcast wasn’t an exceptional album, it was a very lovely one in places.

The release of Corney’s second LP, Modern Worship, on US label True Panther – home to the likes of Teengirl Fantasy and Girls – stands him on a broader electronic pop platform, and it seems his ambitions have grown to match. Sure, the use of chunky percussion and a professed newfound love for hardware might suggest a cynical bid for that lo-fi house dollar (take, for example, the opening of ‘The City Is Ours’). But such suspicions are only fleeting. These are synth-led pop songs, essentially, built from forthright verse-chorus structures, heartfelt chord progressions, layer upon layer of melody.

In fact, so ‘pop’ are Corney’s constructions that they often seem to be crying out for a vocalist – and, in places, Corney obliges. Long-term collaborator Alison Garner makes a return on ‘The City Is Ours’ and ‘1000 Lights’, although her whispered, half-there delivery doesn’t make much of an impact. Far more convincing are efforts from former Golden Silvers frontman and pop auteur-in-the-making Gwilym Gold. Gold’s input yields the album’s highlights – ‘Left’, ‘Four Walls’ and, in particular, gorgeous lead single ‘Northwest Passage’, on which the singer’s fingerprints are strongly evident – not only in his ethereal harmonised vocals, but in the baroque chord progressions that they outline, coiling gracefully over a stolid drum backing.

These three songs are rather cryptic and withheld – again, you sense, a product of Gold’s influence. But otherwise, and in spite of its lack of concern for dancefloor functionality, Modern Worship tends to be a more upbeat, forthcoming record than its predecessor. Where before Corney’s twitchy rhythms were framed by a negative space that seemed to imply grave, loping movement, now we’re more likely to be treated to a pert synth-pop bounce, even at points approaching the freneticism of juke (see ‘Playing The Game’).

Still, this isn’t as a route to aggression so much as joyous celebration – particularly in the album’s increasingly ecstatic second half. ‘Lake Rider’ trades in bright, crystalline melodics, while the brisk electro-pop one-two of ‘Lovers’ and ‘Jam The Network’ both periodically ascend into billowing euphoria. These moments possess something of the clear-eyed wistfulness of vintage Aphex Twin or Mu-Ziq, and once you’ve detected the influence of golden-era IDM you may begin to hear it in every crevice (the latter half of ‘1000 Lights’, for example, sounds like a more urbane version of Squarepusher’s ‘A Journey To Reedham’). Ultimately these tracks live and die by the strength of their melodic ideas, and in this regard Corney is proficient but not brilliant. It’s fair to say that Modern Worship is the fullest yet realisation of its creator’s distinctive vision, and it’s a rewarding album – but not quite a stunning one.