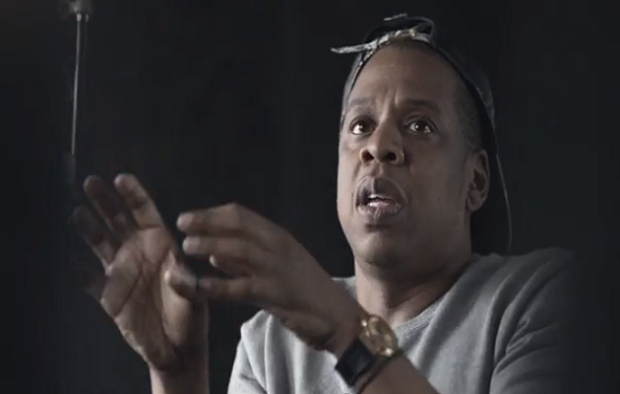 Kanye might be on the cusp of releasing his scintillating Yeezus LP, but its seems his Watch The Throne cohort is also getting in on the action.

On Friday, Jay-Z posted an image onto his website instructing people to keep their eyes on game five of the NBA finals. As Pitchfork report, Jay-Z pulled a Daft Punk during said advert break, broadcasting a commercial announcing his twelfth studio album.

The LP, titled Magna Carta Holy Grail, is due on July 4. The video shows Jay-Z in the studio with Timbaland, Rick Rubin, Pharrell and Swizz Beats – all of whom will, presumably, have some role in proceedings. Frank Ocean, Raekwon, The-Dream and Drake are all rumoured to appear, and this photo also suggests Justin Timberlake and Nas might have had some input too.

Rather than hitting stores straight off the bat, the album will see release through an app on Samsung Galaxy phones, which will be available to download through Google Play on June 24. The first million users will be able to cop the album for free, with a full official release following the same week. According to a soundbite from the video:

“The album is about this duality of how do you navigate your way through this whole thing, through success and through failures, and remain yourself?”

The advert in question is below. Jay-Z’s last album was 2009’s The Blueprint 3.