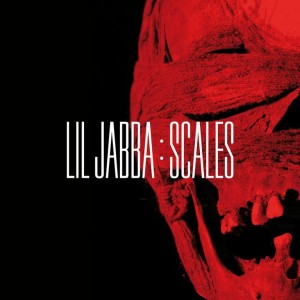 Alexander Shaw is a paragon of 21st Century rootlessness. Born in Australia, the producer known as Lil Jabba spent his formative years in Paris and New York, before settling in Baltimore to study art. There he developed an interest in Chicago’s insular footwork scene, and he’s now part of the extended family around Teklife – the well respected clique home to such luminaries as Rashad and Traxman. Shaw discovered footwork through YouTube (Walacam to be precise), and he’s rarely visited Chicago. But unlike many “outsider” takes on the style, the Jabba sound retains many of its core values, re-working them sensitively rather than skimming off a few rhythmic patterns and hammering them ad nauseam.

As for what, precisely, that sound is, the distinctive sizzurped audio signature slathered across many of Shaw’s tracks sums it up pretty neatly. Across a series of self-released cassettes and digital EPs, Shaw has developed a style that is dark, surreal, and often deeply druggy, as if heard through a generous fistful of prescription-only painkillers. Scales, the producer’s debut album for Local Action imprint [full disclosure: a label independently operated by FACT staff member Tom Lea] is no different. In contrast to the bare-ribbed functionalism of much footwork, Jabba mixdowns tend to be thick and fuggy, their percussion sounding half-choked by the humidity. Subbass is, of course, amply present, but it rarely supplies the narrative thrust as it might in a battle track; instead, Shaw lets his motley assortment of samples and synth patches lead the way.

Occasionally they lead him onto familiar terrain: ‘Precision’, in particular, comes close to the sort of dusty soul-sampling that someone like Traxman might indulge in. But otherwise we’re often pulled down the rabbit-hole into bizarre parallel worlds. ‘Cavern’ is built around an odd flute-like sample that goes off on a baroque tangent in the breakdown; ‘Maven’’s B Movie schlockiness, theremin-esque melodies and all, is hugely appealing. As befits a dream world, there’s an edge of nightmare to it too: ‘Raiders’ is seriously dank, whilst the creaky orchestral sample that opens ‘Echinacea’ gives way to a succession of baleful synth motifs, each more unhinged than the last. But, perhaps surprisingly, Shaw can do poignant just as ably, and this record’s finest moments come when he finds a gorgeous idea and simply gives it the space to breathe: see ‘Tomorrow’’s sampled close-harmony vocals, or the languid twilit paranoia of ‘Station North’.

In any case, if something here doesn’t appeal then you needn’t tolerate it for long. Shaw’s production style is determinedly ADD, his dense, multilayered arrangements often shuffling through several different ideas in quick succession, or spewing out brand new material in their dying seconds. It’s a compelling approach, even if it feels like needless pranksterism in places (as in the indecorous trance synths that maraud across the mix in the latter half of ‘Loki’). Ultimately you’re best off taking the rough with the smooth: Scales may be a deeply idiosyncratic footwork album, but it’s far too accomplished to be dismissed as simply “oddball”.