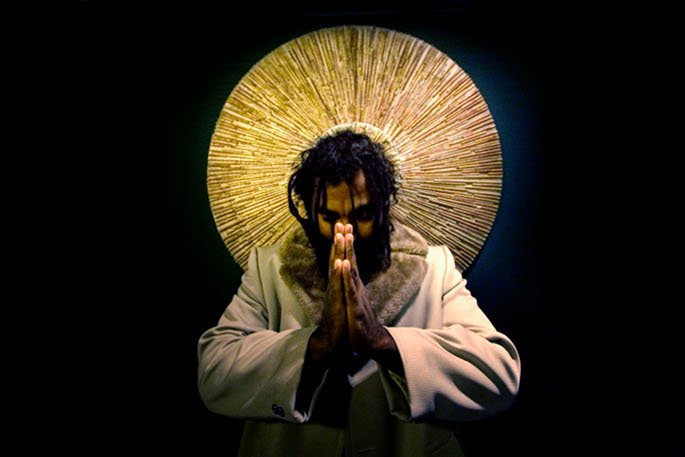 The San Diego shaman has announced plans to re-release his first four albums under his real name, Sumach.

Gonjasufi’s self-produced and self-released first record, Dead Midget on Stilts, came out as a CDR in 2002 and was heard only by the few who’d crossed his path along the west coast. Now he plans to make the album available again on cassette through his own label A.I.R., in a limited run of 300 copies.

Here’s what he had to say about it:

Thanks to those who already know, who bought a cd off me back when I was selling these hand to hand. Your support got me here to where I’m at! And for those who didn’t know, in these recordings you’ll hear the same raw, crazy out-there lo-fi space dirt crunch of my Warp releases, and plus some of what a lot of you haven’t heard. Some just don’t know where I come from…these are my roots right here and some of my rawest work to date. I listen to this record and think, how the f*ck did I come up with this sh*t…

Meanwhile, Jay-Z dropped his new album Magna Carta Holy Grail today, and it turns out the final track is based on the beat from ‘Nikels and Dimes’, a song from Gonjasufi’s 2011 record MU.ZZ.LE. You can hear it now if you’ve got the Samsung app.

Earlier this year Gonjasufi released a split 7″ with fellow Brainfeeder affiliate Ras G, while FACT caught up with the croaky voiced one last summer to find out how he tries to make music that “goes in all directions”.

Here’s the track ‘Disintegration’ from Dead Midget on Stilts: