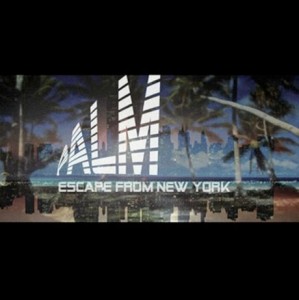 Palm Highway Chase’s magnum opus Escape From New York sits somewhere between new music, a reissue and FACT’s own Free Agents feature. Having been independently released via the internet in 2009, it came as a total surprise to learn this month that Editions Mego imprint Spectrum Spools would finally be giving the album a full physical release, alongside a digital re-release – some 5,000 downloads from the artist’s MySpace and Bandcamp pages later.

Palm Highway Chase could be considered part of 2009’s Wire-dubbed ‘hypnagogic pop’ watershed, but I can honestly say that he is also the only person of that scene I can even remember today – other than Emeralds and Oneohtrix Point Never, who arguably never fit in that box anyway. Escape From New York was a stunning album at the time for standing head and shoulders above other bedroom producers appropriating ’80s electronic music tropes, but also for being a micro-masterpiece of song writing and production skill, references or no.

The album title may reference John Carpenter’s 1981 classic movie, but Escape From New York has only a small amount in common with its original soundtrack. Where Carpenter’s own synthesizer style was typical of its year in terms of duration, space and simplicity, the music on this record is much thicker, far more active, stylistically of at least five years later. It’s a concentration of America’s late ’80s, the boogie and Italo-indebted mega-studio pop and soundtracks to TV shows like Airwolf, or a myriad of cartoons like Bionic Six, Jayce and the Wheeled Warriors, and Series 3 of Transformers. (Seriously, the opening theme to that season? Wow.)

The result is a full tilt blast of arpeggiators, squealing synth guitars, Motorik drum machine thunderings and power ballad chord melodrama over nine quick-running tracks. But what makes Escape From New York particularly surreal is its rendering in low fidelity, parts smudged and blurred through heavy EQing; this creates a squashy, grainy, Technicolor mulch that both camouflages the period it was produced and turns everything particularly dreamy. The muffled beats and pulsing bass of opener ‘Space Again’, ‘Desert Driver’’s wet grinding bassline beneath crazed synth spasms, and the cowbell-driven neon light fades of titular track ‘Escape From New York’ are all high points.

It’s not for the faint-hearted, however. Even at a brief 26 minutes long, Escape From New York’s constant activity can be exhausting, and its occasional sidechaining and gated beats can also err too close to ‘US student party’ in the amount of ironic fist pumping it could provoke. This is, admittedly, glaringly 2009 in how it has dated, but happily only occurs in a couple of places – and in any case, the vast majority of this record is so bewildering it doesn’t even matter; it’s just part of the experience.  Escape From New York is everything that Drive should have been; overly pumped, hyperactive and ridiculously styled, but with a wealth of nuanced detail to be fascinated by – even four years later.