And this one time…the best Bandcamp releases of the month: July 2013 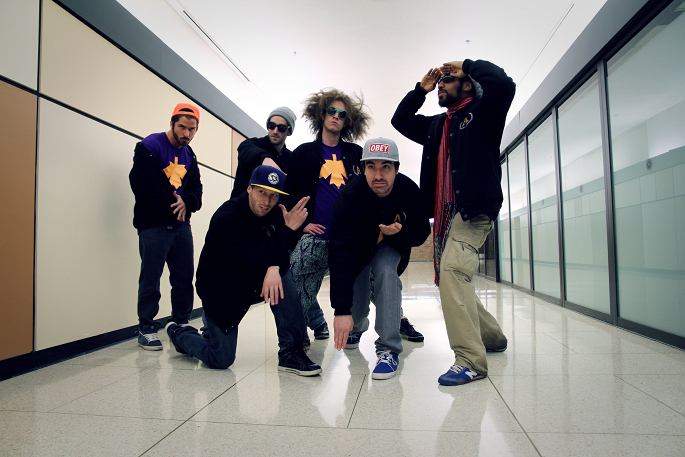 You’d be forgiven for thinking that Jay-Z’s much touted #newrules, of which his new branded album MCHG is the latest incarnation, were anything but a clever repackaging of existing rules. In fact #newrules are perhaps best summed up by an existing industry rule, number 4080. In the latest twist of the #newrules, Jay-Z took to Twitter yesterday to apparently answer questions from anyone. A glance at what he’d deigned to answer seemed to suggest a gross exaggeration of the concept of a ‘question’ – unless you consider various wordings of “OMG Jay-Z is replying to randoms on twitter lol!!!1!” to be questions, and Jay-Z replying with various inanities to be answers. Looking at his feed today, I can only see one Q&A left for the public to ponder , whereby Jay explains how he singlehandedly forced the RIAA to factor in digital. Clearly public transparency and humility are not included in the #newrules deal.

Sarcastic jokes aside, the non-music side of the MCHG saga is hardly surprising. Jay may be a great rapper, but he is also now “a business, man” – and, lest we forget, being such an anthropomorphic idea comes with a set of rules that no amount of hashtagging or new media integration will change. The real #newrules of rap and hip hop aren’t to be found with its ageing royalty, but rather with its new blood. And chances are you’ll find a growing amount of them not on the ad-bloated, #newrules-esque mixtape sites that have replaced the hip hop shops of the past decades, but on Bandcamp, alongside a growing number of older heads who are putting the platform to good use for both new releases and back catalogue re-ups.

Just the other day, I came across the CunninLynguists’ page (remember them?), which includes a good chunk of back catalogue. Wu Tang have perhaps been one of the bigger rap endorsers of Bandcamp so far, with RZA’s Soul Temple label setting up shop on the website last year. In fact, a quick look at the homepage’s best selling hip hop and rap will reveal a healthy mix of old and new, digital and physical. The top 8 best-selling releases at the time of writing included Tony Touch, Ta-ku, Kenny Segal and Open Mike Eagle. And that’s barely scraping the surface.

On the European side of things, Cologne’s Melting Pot Music wear their love of classic 90s head-nod vibes proudly and loudly while London’s One Handed Music has been one of the most consistent purveyors of fine rap and beats on Bandcamp. This is thanks to consistent quality on the part of their main attraction, London producer Paul White, whose good friend Danny Brown could also be found on Bandcamp earlier on in his career. Then you have Los Angeles’ new rap underground, with Jonwayne’s pal Zeroh, who recently dropped a pretty good compilation of out there rap shit, and LET’s resident MC Nocando with his latest mixtape. And there’s also North Carolina’s Deniro Farrar, whose latest album The Patriarch II shows that street credibility is compatible with giving your audience a properly packaged product – mixtape websites, please take note.

I could go on but I think you get the gist: the real #newrules of rap don’t come co-branded by a South Korean electronics giant (although that doesn’t mean new technology and social media can’t have a hand in it). Additionally, this month’s intro was a clever ploy to include an extra serving of Bandcamp pages as I didn’t feel like taking over the entire column with hip hop releases…yet.

As for this month’s actual music, there’s still some rap as well as heavy doses of African vibes, eyes-down skankers and electronic strangeness from Japan.

I’m not quite done with the whole rap thing yet, sorry. Metabeats is one half of production duo Darkhouse Family and a man who is more than adept at crafting banging hip hop beats. On his second album, Caviar Crackle, he and Ed Boogie handle things with expertise by tilting between vocal and instrumental cuts, drawing from a wide palette of styles – dusty flips, sparkly soul, dark electronics – and inviting an impressive range of MCs to the party in the process. Action Bronson, Quelle Chris, Ralph Rip Shit, Dubbledge, the aforementioned Zeroh all feature. Who said UK rap tings were dead, eh?

OK, this is the last rap-related link this month, promise. Alaclair Ensemble are from Montreal, the latest in a long line of forward thinking hip hop crews that hark back to the city’s pioneers such as Ghislain Poirier, Sixtoo (and his Megasoid incarnation) or even Lunice.

I guarantee that Les Maigres Blancs… is the most bonkers rap release you’ll have heard so far this year – brilliant in its disregard for conventions, its pillaging of aesthetics, its tongue twisting raps and its laugh-out-loud jokes. Granted, some degree of French fluency is necessary to fully appreciate it – and even then, unless you’re used to Quebec’s mind bending linguistic fusion of French and American English, there are still things you won’t understand. But that doesn’t diminish its impact any one bit.

As far as I’m concerned this is one of the best rap releases so far this year.

Available as pay what you want digital and CD.

One of dubstep’s prodigal sons returns to Om Unit’s Cosmic Bridge imprint, just in time to toast the label’s move to Bandcamp. Adding to the celebration is the fact that this is also the label’s first release with full colour, hand-drawn artwork, courtesy of Meloncholy.

‘Rhythm On My Mind’ is a trippy slice of dubstep bass weight, subverting the genre’s tempo grid with a looseness reminiscent of hip hop, while ‘X-Files’ continues Kromestar’s exploration of the faster/slower “is it drum n bass or is it not” tempos in timeless eyes-down fashion. It’s always the quietest ones you need to watch as they say.

Available as a digital or 10” vinyl with full colour sleeve (released July 22).

Some more African-meets-electronic business from London this month courtesy of Fofoulah, the latest in a growing number of bands showing that London’s live and experimental scene is more than healthy.

The six-piece band mix Senegalese and West African musical traditions with jazz, dub and electronics for something that totally hits the spot: catchy, intricate and full of vibes. The band’s credentials are pretty solid, and it shows in just how tight they are, pulling off what could easily be a tepid mess of world music appropriation.

EL MAHDY JR.
The Spirit of Fucked Up Places

Continuing the experimental and African themes is this release by El Mahdy Jr. on Portland’s Boomarm Nation, which is also home to Gulls who I featured last month.

Mahdy seems like a fascinating character – an Algerian native who fled the civil war for Turkey before returning to North Africa, being hit by malaria and using that time to paint trance-induced blends of local music and hip hop beats. This is highlighted in this debut release, a thoroughly captivating escapade into electronic, hip hop and native aesthetics that shows a degree of skill and maturity rarely heard.

In parts, it reminds me a lot of Maga Bo’s work, and definitely fits proudly into a growing tradition of transcontinental, bass-heavy electronic world music. Some seriously mystic business. Future mysticism perhaps?

Available as a digital and limited edition 12” vinyl with hand printed jacket.

Up next: electronic mentalism from Sapporo, Japan courtesy of the Pipe Dream crew.

Japan’s northernmost Hokkaido island is in many ways similar to Scotland, and not just because it’s up north and the weather’s shit for most of the year. It’s also home to some pretty healthy underground scenes, ranging from dub to hip hop and dance music, and Sapporo is its nexus. In fact, that’s where one of Japan’s best-kept production secrets, O.N.O, resides (go Google him up). The artists featured on Pipe Dream Vol. 1 are all part of the new breed of this healthy underground and, across the compilation’s seven tracks, showcase a clear talent for unusual approaches to ethereal electronics, abstracted hip hop and dancefloor vibes.

MELT YOURSELF DOWN
Melt Yourself Down

Wrapping up this month with yet more African-tinged madness. Blame London’s current heatwave.

Melt Yourself Down are a six-piece live band and this self-titled debut was produced and mixed by Leafcutter John (remember him?), who I last saw live with Polar Bear, and who it turns out Melt Yourself Down’s saxophonist, Pete Wareham, sometimes plays with. As I’m fond of saying, the music world is incestuously small, and the internet ain’t helping.

The music on their debut is upbeat and hot, clearly drawing from Africa for rhythmic energies but taking the whole thing further out into space. Not for the faint hearted, but then those people are boring anyways.

Available as a digital, CD, vinyl and variety of bundles including a canvas bag.

PS: there’s an interview with the band over at The Quietus and it looks like it’s also one of their albums of the year so far – so clearly they have good tastes.

Searching for the perfect tag:
BILLINSKI
We See It Our Own Way

Unlike #newrules practicioners, I won’t lie to you: this month’s tag search was done a lot more quickly than I’d have liked to. Still, it seems to have paid off again. The tag was “space”, and while it threw up some fairly dubious pieces of artwork and names, after a few misplaced clicks I opted to try the first featured release Bandcamp gave me. The site now seems to have its own randomly (?) generated recommendations for tags at the top of a page.

Anyways this month’s tag winner is Billinsky, a producer from Tallahassee, Florida. I always liked that city name, kinda rolls off the tongue in a typical American way. There’s also “Pittsburgh” included in the tags, so maybe that’s where he comes from. Once more, the page isn’t particularly forthcoming with information.

The music on We See It Our Own Way is, however, pretty fitting to the tag that brought me there, with a heavy leaning on the instrumental hip hop and beatscapes that proved so popular in the late 00s. In fact, I’m pretty sure the track ‘Lucky Situation’ that just came on as I wrote this includes a vocal sample that a famous beat guy made famous in one of his first releases for a famous UK label. Can’t quite tell if it’s the same source sample, or a sample of a sample. The latter wouldn’t surprise me considering how things have been going with sampling and the new generation of beat makers.

It’s a solid release though, a nice headphone trip and definitely worthy of your time. And before you say anything I swear this was a totally random find, despite my predilection and interest in the so-called beat scene and its history. Call it fate, industry rule 4081