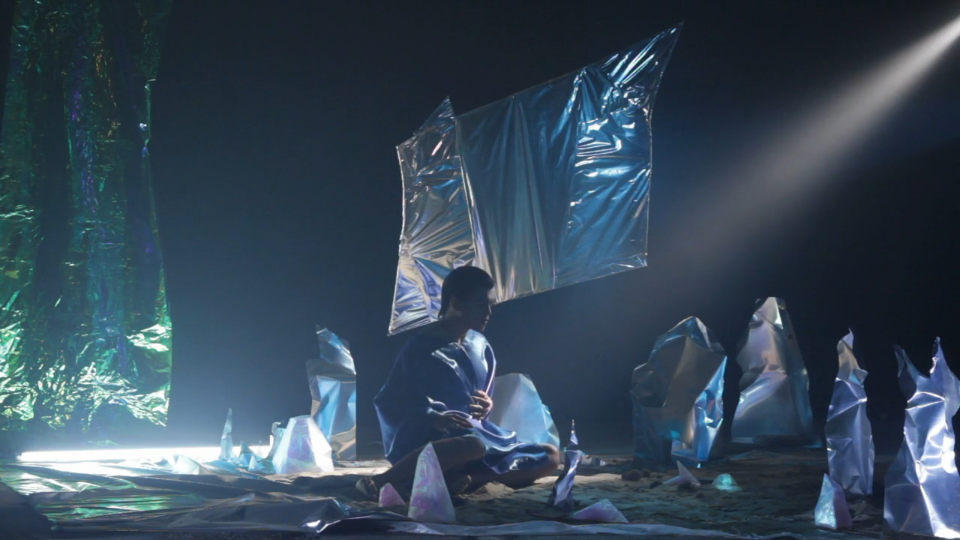 A geode, a mysterious printer, a field of metallic crystals, and a cast of interpretive dancers are just a few of the images in director Adriana Alba’s (Xiu Xiu, Gary War, R. Stevie Moore) video for Xander Harris’ ‘Red Sky Sprawl’. Alba explained the genesis of the video via email:

“I was inspired by everything from traditional Korean dress and Michael Powell’s Red Shoes to early Bergman films. However, I was most immediately inspired by the journey reflected in the track’s overarching composition. While the intro feels troubled, trying, and desperate, a gripping expanse of energy swells as soon as the staccato synth sequences engage.

“As such, the video itself investigates how two characters get transported from the monotony of the present into a more dynamic place, only to be imprisoned within the abstract spaces of their souls. I wanted to explore the extreme contrast between the three worlds via a certain intense physicality while also maintaining a certain timelessness within the overall aesthetic of the video. To me, there was this interesting dynamic between bodies shackled to the monotony of a non-space to the energy of freedom in the body via dance. I wanted to create a triptych of mythology, fabric and color.”

Watch the video below. The New Dark Age, which finds Harris embracing a “sleek, streamlined, cold-wave/dystopian sound,” is out now on Not Not Fun.