Vinyl On Remand: inside London’s only vinyl lending library

Photo by: The Hackney Gazette 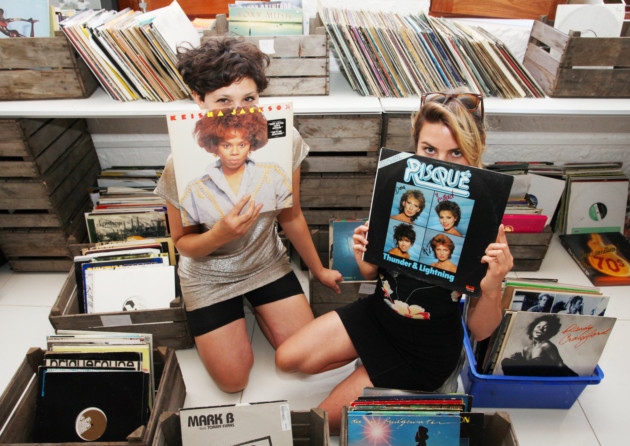 “We want this side to be wall-to-wall vinyl.”

So says Sophie, sweeping a hand across one side of her newly-rented property. The building is littered with huge unsorted stacks of 12” records, currently being sorted for this week’s public opening as London’s only vinyl-only library. “Record stores can sometimes be intimidating”, says Sophie, “and we want to create a non-commercial space for people to hang out and share music – a creative hub.”

Sophie Austin and Elly Rendall, old friends, garage DJs and now co-proprietors of The Vinyl Library are a new front in the revival of physical musical formats. A small monthly subscription buys you unlimited rentals of up to five records at a time – those who donate their unwanted vinyl as stock get their subscription free. The business will be run as a not-for-profit.

“We want to get more people into vinyl and would like to create the bridge for people just starting out to come and experience it,” explains Elly. “Then, when they’re more confident about what they like, they can build their own personal collection up by buying from the record shops.”

“Are you on Soulseek?” asks Sophie, referring to the peer-to-peer file-sharing website. “We used to use it when we were DJing. At first I felt like a kid in a candy shop – “All this music!” – but after a while I felt that I had this mass of music that I’d forgotten what it was or who it had come from.”

Sophie and Elly want the catalogue to serve a number of purposes: for the public to explore new music; for radio and club DJs to borrow material; and for producers to find new samples. But they also have aspirations to use the catalogue in other ways – DJing lessons for ex-prisoners and music events, to name a couple.

“We want to get more people into vinyl and would like to create the bridge for people just starting out to come and experience it.”

When FACT visits the premises of this new experiment in music consumerism, Sam, a volunteer, is cataloging a mountain of donated 12-inches into Discogs. He holds up the soundtrack to Charlie Chaplin’s 1952 comedy-drama Limelight. “The last track on this is called ‘Smile’,” he explains, “It was Michael Jackson’s favourite song and it was one of the first records that was sold on stereo sound.” Next on the newly-donated pile of vinyl is a Kim Hiorthøy LP, followed by Johnny Cash’s A Boy Named Sue. Sam says that old soul records had been in abundance that morning.

Conspicuously absent from the piles of records stacked in the east-London shop are the mass-market records you might expect to be generously represented in a library stocked exclusively from donations. No sign of  Lionel Richie’s Can’t Slow Down, Meat Loaf’s Bat Out of Hell, or any other hoary ubiquity from the 70s and 80s.

As it’s building a collection from scratch, the library is not being snooty about what it accepts, and Sophie and Elly’s connections and music-industry interest in the project have ensured a steady flow of decent music through the front door. “We’ve got a few friends that DJ and make music,” says Sophie. “Bullion gave us some of his collection, and we’re getting emails all the time from labels who want to send us vinyl.”

“We had Gearbox Records [a UK based jazz and blues label] come down to the library to donate some limited edition records,” adds Elly. “They wanted to donate to the library because it will give more people access to their music – including those who can’t afford to spend £30 to £40 on a single record.”

Depending who you talk to, a vinyl library sounds like either the best or worst idea in the world. “Every day we get producers in here and I really doubt they’re going to use a library to find samples for their music,” says one East London store manager. “They are into the original material they source their samples from anyway, because they’ve owned it for years and learned to love it over months, or even years. I just can’t see something as ephemeral as record rentals changing that behaviour.”

Another record store owner in South London points out that vinyl libraries never worked in the first place. “It’s a nice idea but it didn’t work in the 1980s and 1990s and I can’t see how things have changed now,” he says. “With all the best will in the world, the records eventually get trashed, as it only takes a minority of people who don’t take care of records to ruin the collection.”

Naturally, you might expect record retailers to dismiss a new way for people to consume vinyl, which one day may become a source of competition for them. The girls seem sanguine about The Vinyl Library’s prospects for success. They say that all of the records they have compiled to date are in great condition and that by “building relationships” with the library’s customers – and offering valuable and rare vinyl to only trusted clients – they hope to ensure the security of the collection.

“People are saying, “How are you going to pay for the rent?”, as we’re not going to be earning masses of money from rentals in the short term. But for anyone asking how it will be sustainable, I think you’ve just got to be savvy about how you use the space.”