The Word as Power 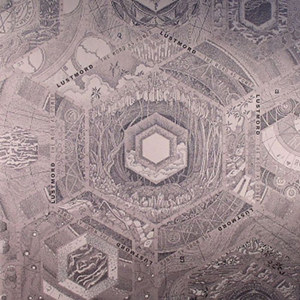 Renowned as one of the pioneers of the dark ambient genre, Lustmord’s latest album is essentially a piece for chamber choir and electronics. It also features a stellar line-up, that chamber choir consisting of ex-Swans frontwoman Jarboe, Maynard James Keenan of Tool, and Soriah, an American specialist in Khöömei, Tuvan throat singing, alongside soloist Aina Skinnes Olsen.

Khöömei is founded on drones and nasal overtones, a reverential, abstract imitation of the sounds of nature – animals, wind and water – neatly complimenting Lustmord’s own drones, field recordings and cavernous use of reverb. This technique is arranged with other complimentary deliveries from the chorus; wide-throated utterances, mid-range wails, subtle, animalistic contortions and Gregorian-like sombre intonation. You’d never be able to identify the singers were it not for the release notes.

These voices, sitting at the peak of Lustmord’s subtle interactions of reverb-drenched sound layers – sub-sonic grinding, glacial explosions, resonating reverb tails, rumbling collapses – hover in the stereo space. It’s a ball of parts floating above an abyss, a steady suction from below causing it to slowly tumble and revolve. At 74 minutes long and barely straying from this idea, it is typically immersive dark ambience, and a thought-provoking listen for those who wish to lose themselves.

At certain moments the overpowering reverb dips close to cliché, but the one aspect that really tips The Word As Power into overwrought is the prominent lead vocal lines of Arabesque melodies and more overt overtone solos. Not the parts themselves, as they are beautiful – Olsen’s performance as alto soloist is excellent, as is Soria’s – but the inclusion of regional identifiers like these splice the music’s ambiguity in two.

Maybe I’m just wary of a certain listenership looking for the next step in dull, controversial catharsis – a more cynical version of this, if you like – tied up in the doomy, Satanic, man’s-inhumanity-to-man themes prevalent in so much of the noise/drone/techno/power electronics/metal scene. However, I think Lustmord is genuine, more like Dante or Milton, exploring the idea of an ancient ‘truth’ in a more contemporary setting.

Identifiers aside, what’s most relatable about The Word as Power is a similarity to something Autechre mentioned in an old interview; a desire to reach ‘Year Zero’ of music via their technologies. There’s definitely an ancient, unformed quality here, and it results in some of Lustmord’s most inspiring work to date.