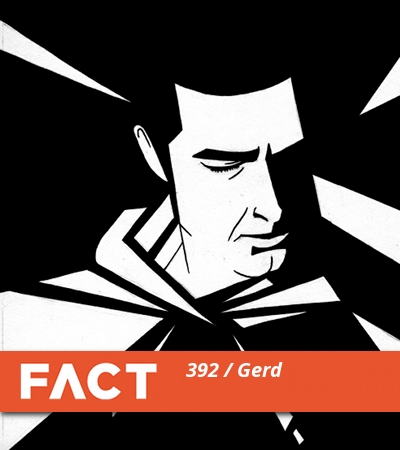 This week’s FACT mix comes from Gerd, one of house and techno’s most in-form artists.

Despite Gerd a) having released records since the early ’90s, under various aliases for various labels including Clone and Life Enhancing Audio, and b) being really, really, fucking good, he’s surprisingly hard to write about. He’s a less talk and more action kind of guy, preferring to let his music speak for itself. In football terms, he’s more Lampard than Hazard; more Deschamps than Cantona – someone who’s easy to overlook, and might not make for an exceptional YouTube highlight reel, but whose record simply speaks for itself. As a remixer, he’s been particularly on form in the last few years, delivering hit after hit both as Gerd, and as his Geeeman and his NY Stomp alter-egos.

Talking to FACT about his mix, Gerd explains that he “wanted to make a selection with a lot of variation, maybe even use genres that are extreme compared to each other when put together into one mix. The first half is more organic and the second half is pure electronic. The mix starts with some (known) disco classics, island boogie, afro disco and some weird Eastern Europe disco/boogie. Halfway throughout the mix you’ll hear the atmosphere’s getting darker with more modern jackin’ tracks: just tracks that I love to play out on the right occasion.”

Basically, if you liked Metro Area’s Fabric CD (and who the Hell doesn’t like Metro Area’s Fabric CD?), then you’ll love this. No tracklist, so spotters – it’s your time in the comments. Here’s what else Gerd has been up to, and if you like what you hear, he’s playing at Eastern Electrics Festival on August 2-4, with Moderat, Maya Jane Coles and more:

What have you been up to recently, both in terms of your productions and your label?

I remixed Victor Simonelli’s classic ‘Do You Feel’ me that will come out this summer on 4lux (vinyl) and Bassline (digital). I am currently remixing 2 other classic house tunes from the 90’s as well as some new tunes. Can’t say too much about this but hopefully they will all be released after Summer. I almost finished a new NY Stomp release with a singer from the early Tribal USA/UK stable and new trax as Gerd and Geeeman are also in the pipeline. With 4lux we just released Nicholas’ new single called Stronger. It’s a really nice house record featuring vocals by Jessy Allen and a remix by Quell. After summer we have singles coming up by Mateo & Matos (a re-release of one of their classic tunes including some nice remixes), Frenchman Mome, Eurotrash, De Sluwe Vos, Kaspar, Life On Mars and hopefully CHesus aka Earl Jeffers. The Organ Grinder is working on a full album.

What particular artists / records have you been feeling lately, both old and new?

There are so many good artists out there. I:Cube is one of my all-time fave producers. His productions are always inspiring, unique and well-produced. Ripperton’s upcoming album for Green is amazing and I just love all things that DJ Koze is doing. I have been following Recloose since the start of his career. We kinda went a same route: released our first record with a US label – him: Carl Craig’s Planet E in 1996 (or was it later?), me: Johna Acquaviva’s Malego in 1991 – and we both explored many different styles during our careers. The thing is that Recloose is a much better producer, with more musicality, than me. The same goes for Mark Pritchard. I have personally known Mark since the early 90’s and it is amazing to see what different things this man has done the last 20 years. It’s inspiring to listen to all these guys’ music. I listen and try to learn.