From the Archives: The History of Touch 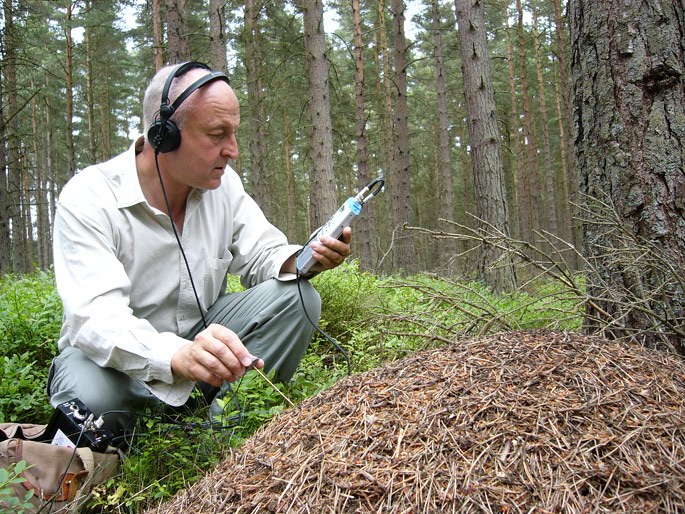 From 2003-2008, FACT operated as a bi-monthly print magazine. As part of our From The Archives feature, and to tie in with out 10th birthday celebrations, we’ve uploaded a cache of vintage articles from FACT’s ink-and-paper days. Below is Kiran Sande’s guide to Touch Records, originally published in 2008.

An alternative to the dematerialised world of digital sound, the ideas and operations of London-based audio-visual imprint Touch are proving more important and more thought-provoking than ever.

It’s 1981. Punk has arrived and dissipated in one white-hot magnesium flash, but what we now refer to as the post-punk period is very much ablaze, the country’s network of fanzines and burgeoning independent record labels expanding at a furious rate. Out of this smolder and smoke, student Jon Wozencroft establishes Touch with his friends Mike Harding and Andrew Mackenzie. Over the next 27 years it will become arguably the finest audio-visual label in the world, an imprint whose product, modes of transmission and philosophical concerns embody, but also critique, the fundamental transition from analogue to digital technology that has defined our cultural age.

“There was just such great music being produced in ’79, ’80 and ’81,” explains Wozencroft, London-based co-founder and art director of Touch, “and you had that sense of movement in the culture, and also very strong things around it – like film, the development of the Film-makers’ Co-op, the distribution of art-house films, writing, journalism. The idea that you could bring all of these aspects together had been shown by groups like Cabaret Voltaire, and I just thought, well, what’s the obvious extension of this?”

The obvious extension was Touch, an audio-visual “publishing project”, which has acted as a curator and disseminator of experimental writing, film, graphic design and music ever since. Touch is perhaps best-known for releasing paradigm-shifting electronic works by Fennesz and Gerd Jansson (AKA Biosphere), but its range of focus is far wider, its catalogue more rich and varied, than to be described as merely ‘electronica’ or ‘ambient’; the ideas it explores are too prescient and important to be stored away in the broom cupboard marked ‘experimental’.

And as its owners never tire of asserting, Touch is about more than music. “We’ve always tried to pay attention to all of those invisible feelings and ideas about atmosphere and space and presence that are difficult to talk about and need a context in order to be talked about,” says Wozencroft. Providing such a context is Wozencroft’s specialty, and his design and editorial work for the label is as much a part of the finished artwork as the music.

“I don’t know if I’d like to start a label now. There was a support system and a desire in culture for difficult music in 1980-81,” he explains. “You were just coming out of the back of Public Image’s Metal Box, Joy Division, Gang of Four, Wire – all these bands that were very daring but also very popular. I think the fact that we came out of that scene gave us an idealism and a kind of faith – that you could produce really good stuff and that people would respond to it – which really kept us going through some of the more fallow years, between the early nineties and the early noughties, when music just became so devalued and so much part of a kind factory floor mechanism rather than a passionate cultural moment.

“I don’t know if I’d like to start a label now. There was a support system and a desire in culture for difficult music in 1980-81.”

Touch’s early releases were cassette magazines, immediately distinguished by the editorial control and attention to detail with which they were presented. The inaugural edition, released in December ’82, featured music from Tuxedomoon, Shostakovich and New Order’s ‘Video 586’, poetry by Vladimir Mayakovsky, and visual interventions from the likes of Neville Brody, Hipgnosis, Malcolm Garrett, Penny Charrington and The Residents. Subsequent issues boasted contributors as disparate and distinguished as Derek Jarman, John Foxx, Current 93, A Certain Ratio, Peter Saville, Gilbert & George, Einsturzende Neubauten, Cabaret Voltaire and Jon Savage. Around this time, Touch also played a crucial role in the import and distribution of so-called ‘world’ music; indeed, the label’s first LP release was The Egyptian Music by Cairo-based composer and musicologist Soliman Galil.

Though the cassette magazines gradually gave way to CDs as the label’s dominant vessel of expression, their mixed media approach and exploratory values define the imprint to this day. Over the past quarter of a century, Touch has provided a platform for sound artists and musical adventurers like Richard H. Kirk, Gerd Jansson, Ryoji Ikeda, Pan Sonic’s Mika Vainio, sometime Sunn O))) collaborator Oren Ambarchi and Chris Watson, routinely providing a visual and material aspect to the sound which is as beautiful and thought-provoking as the sound itself.

Whether it’s a book, a pamphlet, a cassette, a 7” LP, CD or even MP3, Touch has always responded to the innate strengths of the given format, and has always sought out new ways to confer value on the musical product. As you can see from the images in these pages, Touch’s visual identity is complex and ever-developing, but nonetheless it’s Wozencroft’s wide-angle, almost supernaturally vivid images of countryside and nature that dominate. Why the pastoral imagery, when so much of the label tends towards the abstract and electronic?

“The idea is to give music which is primarily instrumental and abstract some kind of narrative strength. I thought it was important to place the natural, physical landscape alongside the dematerialised world of digital sound, in order to have a critical tension between the two, and to place them both in a human context.

“The other thing about my visual work is that you rarely see people in it, because you are invited to put yourself in it, and so it becomes like an open space for this idea of ‘everyman’, rather than something which is trying to commodify you, to make you look at something in a certain way because it’s all about fashion, or clothing, or style, or cool. My work isn’t dealing with any of those codes and signifiers at all, so I suppose it becomes a kind of ecological statement. It’s trying to indicate that there is a bigger world and a larger dialogue out there than what you can hope to reveal within the confines of a digipak.”

In 1996, Touch released the first solo CD by Chris Watson, co-founder of Cabaret Voltaire and The Hafler Trio, former sound recordist with the RSPB and for many BBC wildlife programmes, including David Attenborough’s Life of Birds. The album, Stepping Into The Dark, comprised field recordings of “special places” – among them Santa Rosa National Park in Costa Rica and Glen Cannich in Scotland – captured using camouflaged microphones. Watson’s art is emblematic of the spirit of Touch: working at the intersection of nature and technology, a curator as much as a creator of sound, with a central concern for landscape, be it natural or human-made, and humankind’s place in that landscape. Watson is one of many contributors to the Spire project, which Wozencroft describes as “a creative conversation with so-thought-of ancient music and culture, using really special places to have collaborations between electronic and advanced musicians, and classical composers, in the context of the church organ – which is one of the biggest instruments ever.

This is not the only dialogue that Touch has opened up between past and present. Often these dialogues occur at the level of transmission. A recent project, Touch Sevens, sees the label invite contemporary musicians – not just Touch regulars but also guests like Jim O’Rourke – to produce two sides of music for presentation on the “disappearing format” of the 7”. Affordably priced, adorned in Wozencroft’s sumptuous artwork and representing the breadth and plurality of the Touch sound, these 7”s are a fantastic entry point for the as-yet-uninitiated.

One established Touch artist who is uniquely concerned with vinyl is Philip Jeck. Jeck is a turntablist, but not in the sense that Cut Chemist or Q-Bert are turntablists. Rather, Jeck uses turntables as instruments of great expressiveness, coaxing sounds from dilapidated vinyl to create his own musical language, a haunting, crackle-heavy sound that shares aesthetic concerns with The Caretaker, Pole and, to some extent, Burial – put simply, that the dust and dirt in a record’s grooves reveals as much as the music it distorts. It’s an exploration of memory and of the way we communicate with the past, without recourse to nostalgia.

“I think the idea that you have to do something ‘new’ all the time is one of the great diseases of contemporary culture.”

“I think the idea that you have to do something ‘new’ all the time is one of the great diseases of contemporary culture,” says Wozencroft. “Part of doing something new is to have a sense of time and tradition and what’s gone before; I think it’s boring as hell to think that everything has to reinvent itself in three month cycles.”

Of course, for all its continuing interest in the ancient and the analogue, few labels have explored the vanguard of ‘computer music’ like Touch. In ’96, the same year as Watson’s solo debut, the label released +/- by Ryoji Ikeda, a foreboding masterpiece of electronic minimalism. Two years later saw the arrival of the Apple Powerbook, and with it the so-called ‘glitch’ movement which, for a time at least, was synonymous with the operations of Touch and its continental friends Raster-Noton and Mego.

Christian Fennesz, formerly of Viennese proto-post-rock group Maische, had already established himself as an electronic musician of great repute, but his 1999 album +47° 56′ 37” -16° 51′ 08 (named after the coordinates of his back garden, the site of the open-air studio where the album was created), and subsequent full-lengths Endless Summer (originally released by Mego, re-issued by Touch) and Venice remain high watermarks of electronic music, at once intensely formal and free, expressive, at times even sentimental. His most recent Touch offering was Cendre, a serene ambient collection recorded with Ryuichi Sakamoto; his next solo album is due later this year.

For all the sonic and graphic innovation that digital technology has enabled, Wozencroft remains concerned about its usage and the artificial, quick-fix DIY mentality that it has granted to so much modern-day artistic production.

“The idea now that everything can be done at the touch of a button looks, from a distance, to be a very attractive proposition, but it’s just resulted in this glut of things being released. You have to be really hard on the editing side of things and be willing to say, ‘No, that’s not going to work for the label, we’re not going to release that, you can do something better than that.’ The distinction between playing music and producing and releasing music is an important one. Nowadays it’s commonplace for musicians to have their own record companies, which is great, but… It doesn’t allow you to have that objectivity, or the distance, that makes for the best work.”

“It’s very important to get away from this idea of perfection. What you should look for is refinement, but with mistakes. And frailties. I suppose it’s like writing – the true art of writing isn’t in that stream of consciousness or flash of inspiration at 2am, as much as it’s in taking out those bits that clog it up, putting fifty pieces of paper in the wastepaper basket and editing something down so that it becomes this very clear and rich statement.”

Touch is an example of what can be achieved through collaboration, commitment and an intelligent sense of restraint, or more accurately, control. Twenty-seven years after its conception, the singularity of the label’s vision and the multitude of ideas contained therein is as remarkable as ever. Its history of responding to change and evolving without giving in to the petty comings and goings of fashion is admirable; in contemporary audio-visual art, its synthesis of style and substance has no equal.

Tags: From The ArchivesFACT at 10