The rapper’s second project announcement of 2013 seems to riff on the names of the year’s biggest hip hop releases.

Lupe Fiasco has made another announcement regarding his forthcoming material, introducing Peace Of Paper/Cup Of Jayzus with a release date of 13 September. He also posted a series of notes that look to be lyrics for the project, the title of which makes pretty obvious reference to to Kanye West’s Yeezus and Jay Z’s Magna Carta Holy Grail.

At the beginning of the year the Chicago rapper cancelled work on Food & Liquor 2: The Great American Rap Album Pt 2, switching to a new project titled Tetsuo & Youth in February. It’s not yet known if Peace of Paper/Cups of Jayzus is a song, a mixtape or a full album release, or if the arrival of this project means that the previous two have now been abandoned. [via Hip Hop DX]

The increasingly self-righteous rapper has had a strange time of it over the past year, beefing with Chief Keef one moment, retiring from rap the next, while trickling through releases like the baffling anti-misogyny decree ‘B**ch Bad’. In January he was even thrown off stage at an Obama inauguration gig after playing a 30-minute protest song against the president’s policies.

Check out some of the Peace Of Paper/Cup Of Jayzus lyrics below: 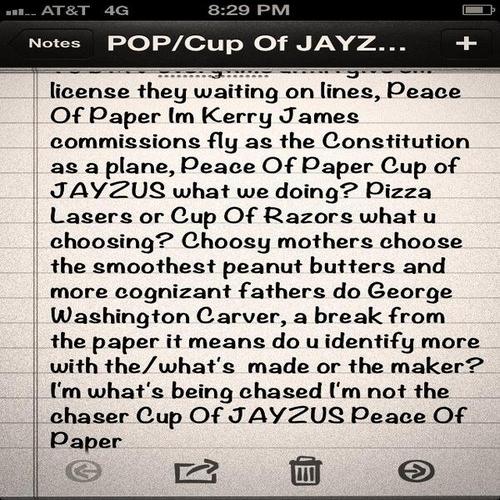