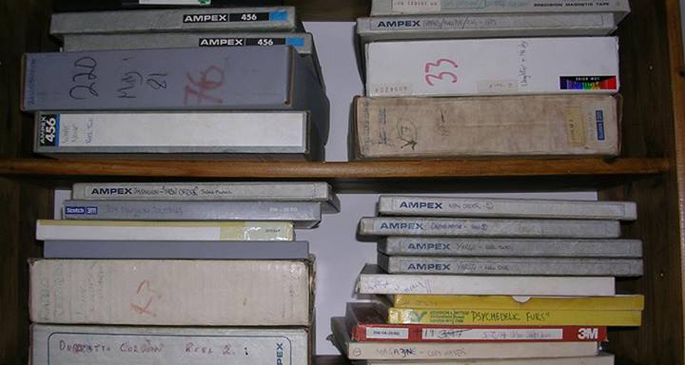 Allegedly saved from a trip to the dumpster (or skip to the Brits), a whole litany of rare recordings made by legendary producer Martin Hannett have been discovered by his former assistant Julia Adamson.

Adamson posted the above photo on her Facebook page, with the rather oblique comment “rescued tapes of Martin Hannetts .. anyone interested.” As anyone who looks closely at the tapes can see, there’s material labelled as coming from New Order, Joy Division, Durutti Column, Magazine, Psychedelic Furs and more, so it stands to reason that there would be plenty of people interested.

Apparently Adamson did try to get in touch with ex-New Order and Joy Division bassist Peter Hook, but was coldly received:

“He’s not a happy bunny. Tried the other band members, too, to no avail, and the record companies… I have looked after these tapes for a long time and when I approached the artists (who were my first port of call) I was subjected to accusations and abuse… so I don’t really care anymore. I know they are worth something to a collector… and good luck to them. The quality of Unknown Pleasures far surpasses the mastering from vinyl over the years (they lost the master tapes long ago… these are copy masters… and outtakes… that I assure you are quite splendid).”

She is currently trying to make sure that a fan gets hold of the tapes, and said:

“I am keen for a collector to have them (the whole collection ideally) as they are very old and probably deteriorating and should be baked or whatever, nor do I really want to look after them anymore.”

The very fact that there’s a possible better version of Unknown Pleasures in the treasure trove should have Joy Division fans chomping at the bit for a piece of the action, but we simply can’t understand why the record companies wouldn’t have been interested given the interest right now in reissues and remasters. At least we can safely assume that the material will, at some point, probably see the light of day. Watch this space. [via Pitchfork]