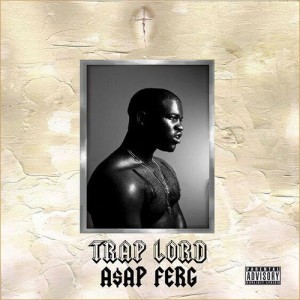 This week sees the release of two very different rap albums, Earl Sweatshirt’s Doris and A$AP Ferg’s Trap Lord. They may appear to have little in common, but both LPs demonstrate a gradual coming to the fore: of crews whose melding together of classic ’90s rap tropes with Tumblr-gen, brand-heavy mentalities (Odd Future’s dense lyrical introspection mixed with shock-jock teenagedom, A$AP’s Houston-worship by way of NY rap iconography) broke their ringleaders as artists first and savvy enablers second, and then Earl and Ferg from misfit to focal point. At this junction though they part ways. Whilst Doris chronicles Earl’s somewhat unwilling come-up story with a side-step from the crew’s goofball tactics and inwards to a deeper nihilism, A$AP’s turning out of various regional styles with a Rick Owens finish acts as the aesthetic buffer for Trap Lord, marking out Ferg’s moody straight-talking against Rocky’s boyish charisma and proving that the wait since Ferg charmed with ‘Hundred Million Roses’ and ‘Work’ has by and large worked in his favour.

Sometimes it’s marvellous (‘Let It Go’, ‘Cocaine Castle’ and ‘Shabba’) and sometimes it’s lacklustre (‘Work’ remix, ‘Make A Scene’) but it’s relentless in its bleak dysfunctionality, and when set against the rest of A$AP’s output it’s also pretty ambitious. Speaking to Hip-Hop DX earlier this year, Ferg spoke of his transitioning between battle rapper and artist (an interesting self-imposed dichotomy in itself), summing up the process of writing a full length as a toss up between “trying to get your point across [and] your art across.” From a distance, his point is exactly in his art. The tight weaving of the dreamy A$AP productions with Ferg’s rebel stance sees Trap Lord teeter somewhere between bullish and elegant, and when it’s well executed it’s a delight.

The production is colder and meaner than anything on Live.Love.A$AP (its nearest kin) as elements of distortion linger beneath eerie synth lines, crashes of thunder and muted string furls. Ferg’s spraying, off-kilter flow is more of a rattling snarl with the occasional smug half-smile, carrying the gloom of the sound with a gait as broad as his glare. The relentlessness of his rat-a-tat-tat delivery on tracks like ‘Lord’, which gives legends Bone Thugs N Harmony a near-perfect outing, has its edges rubbed down by some well-balanced singing on tracks like ‘4.20’ and ‘Cocaine Castle’, the latter a pointed deconstruction of the horrors of addiction over (purposely) Trap Lord‘s most dreamy beat  – proof that even the hard nuts have embraced a more varied vocal range in the post-Drake years.

‘Fergivicious’ is as bold as the punning title suggests, sporting perhaps Trap Lord‘s most developed lyrical outing. On the hook “All I know is pain, surviving on my own”, Ferg hints at the underlying theme of the absent father. Admissions such as “I feel the pain for my bro ’cause his dad died / My daddy gone too my nigga, that’s life” is as tentative a homage as it gets and the fist-bump from Rocky with “See my daddy in heaven, right next to Ferg’s” in the ‘Work’ remix references Ferg’s “See my daddy in heaven, he be the realest G” on the original ‘Work’, quietly solidifying the A$AP connect in more than just stylistic tone.

Trap Lord’s such a tightly bound listen, however, that it jars when it misses the mark. The ‘Work’ remix suffers from misplaced double team appearances that thin out the momentum – asking Schoolboy Q and Rocky to go up against French Montana and Trinidad James is like asking Pharrell to keep an eye on you girlfriend while you’re out for the night – and where the production soars on tracks like ‘Dump Dump’ it’s let down by the lyrics being rote to the point of disposability. The album also suffers from too narrow a scope of lyrical content, but touching the Misogyny In Rap topic armed with less than a few thousand words and a bargepole is unwise for a subject like Ferg and, contextually speaking, these are side-notes in an otherwise decent debut. Whilst Earl may have the lyrical indie corner down with Doris, Trap Lord posits Ferg as the more ambiguous of the two, once again shifting the goal-posts of what rap can achieve in 2013 with its endearing, street-rap-goes-weird mindset.