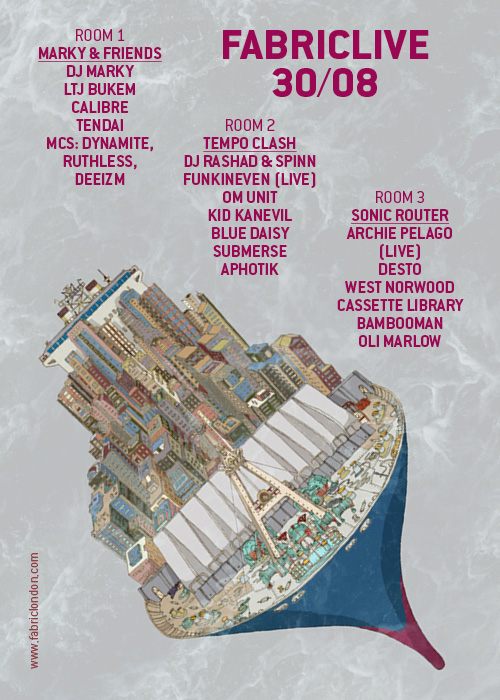 London nightclub throws the net wide with its last Friday line up of summer.

In recent years Fabric’s friday nights, Fabriclive, have offered party goers some of the capital’s most interesting and challenging line-ups by opening up their three rooms to new promoters and collectives such as Manchester’s Hoya:Hoya, the now defunct Club Autonomic or Bok Bok’s Night Slugs.

On the night you’ll be able to catch live and DJ sets from such varied artists as Chicago’s Rashad & Spinn (the former soon to unleash his debut album on Hyperdub), Om Unit (fresh from his Metalheadz release), Eglo Records’ Funkineven, Japan’s Yosi Horikawa (whom we just profiled in our Japonism 2.0 feature), Apollo Records and Project:Mooncircle artist Submerse (whose latest release did a lot for us), grime afficionado and forward thinking producer Visionist, a rare London appearance from Finland’s Desto as well as drum n bass legend Calibre.

To get you in the mood you can stream a promo mix by Submerse below. Head over to the Fabric site for tickets and full line up details.