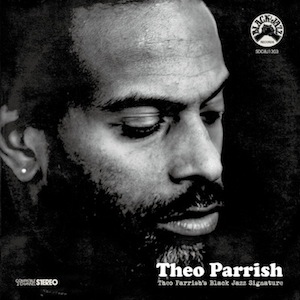 Founded in 1971, Black Jazz Records’ original run was sadly short, drawn to a halt by the death of co-founder Gene Russell in 1976 (it has since been reincarnated). Russell appeared frequently on recordings as a pianist and is said to have been the defining voice of the label, creating an outlet for African American jazz that distinctly embraced political and spiritual ideas; funk, soul, free jazz and other genres were all embraced in doing so, the label’s home of Los Angeles no doubt adding to its voice. After last year’s Black Jazz Radio, mix by Gilles Peterson, Snow Dog Records have this time selected autodidactic jazz master Theo Parrish to choose and mix his own personal favourites from the label’s early catalogue. The result is Black Jazz Signature, and it’s amazing.

Parrish, as would be expected, takes a low key, backseat approach to mixing the tracks he loves; no Flying Lotus pastiches or potentially disrespectful attempts at taming grooves into linear house form. Instead, simple, quick transitions and deft choices keep the recordings entirely at the fore.

The selections are astounding and the energy insistent from beginning to end. The majority of the pieces chosen by Parrish are hugely amorphous, the by-then elastic forms of the most adventurous modern jazz electrified into further flexibility. Black Jazz Signature captures a sheer flood of music, parts crashing and reforming around each other as they break away, jut out, drop back, or lace themselves around others.

Parrish’s switches are clever too: sometimes the blends are complimentary, sometimes they are deliberate headlong drops into contrasting material, sometimes just an unexpected turn of the head to a totally different mood and ensemble. The transition to Rudolph Johnson’s ‘Time and Space’, as just one example, is a wonderful swing away from previously intense psychedelia to tightly huddled joy – as if the lights on one wide, smoky stage had suddenly shut off, only for a bright spot light to pick out an unnoticed group in a different corner.

It is impossible to cover all of the detail on offer across Black Jazz Signature’s twelve lengthy tracks, and especially when the choices made by the performers are so inspiring and often subversive. Russell takes on ‘My Favourite Things’ by deploying truly wild upright bass solos, peppering Rhodes and frantic drums with manic, buzzing energy. The Awakening are visited four times, taking the listener on deep, intense journeys with titles like ‘Convulsions’, ‘Jupiter’ and ‘Mirage’. Calvin Keys’

‘B.E.’ begins with a refrain and rhythm section that wouldn’t be out of place in a soul rock song of the era, the amplified sax or bass clarinet squeals that enter both complimenting and defying such a comparison. The title of Rudolph Johnson’s ‘Time and Space’ seems tongue in cheek during its happy-go-lucky swing beginning, but after coarsening slightly it totally breaks down into freer, dreamy, range-jumping material, Johnson making full use of extended techniques on his tenor sax. Even comparatively ‘straight’ pieces like Calvin Keys’ jazz guitar vehicle ‘Criss Cross’ is punchdrunk in its freewheeling delivery, and Walter Bishop Jr.’s take on ‘Blue Bossa’ slides in to finish the album in ecstatically strange fanfare with wonderfully gelatinously drawbar organ.

Suffice to say, there is far more on offer than this review can cover, but as an exhilarating listen and the perfect reflection of Black Jazz Records’ singular musicians, Black Jazz Signature is a record you will probably keep and return to for life.