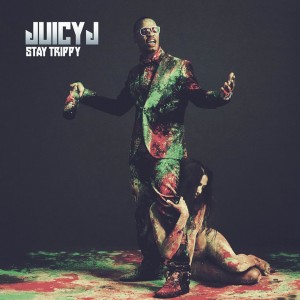 Since teaming up with Lex Luger for a pair of Rubba Band Business volumes and releasing the Blue Dream & Lean mixtape, Juicy J has reeled off a string of club favorites (‘Who Da Neighbors’, ‘A Zip And A Double Cup’, ‘Juicy J Can’t’) and an even longer of guest verses for practically everyone in mainstream hip-hop. If you’ve heard any of those songs, spots, or ubiquitous lead single ‘Bandz A Make Her Dance’, Stay Trippy will not surprise or shock you — and it’s not designed to.

For just over an hour, Juicy J lays down tales of drugs, strippers, money, and guns in a distinctive, staccato flow that has remained unchanged for years. While the sense of humor that separates him from someone like Gucci Mane emerges at times, the brief grins are not quite enough to distract from the relentless, repetitive tropes that have come to define Juicy’s (and the rest of the rap game’s) lyrics over the past few years. Zips and double cups, Bugattis and Ferraris abound, and when he raps “slob on my knob / I think you know the rest,” it’s both a nod to his former group and to the predictable nature of the proceedings.

Lex Luger might have manned the boards for Juicy’s past mixtapes (and he produced ‘All I Blow Is Loud’ here), but the sound of Stay Trippy owes more to his successor as Producer Of The Moment, Mike WiLL Made It. Along with ‘Bandz’, Mike Will’s synths-and-filters sonics show up on ‘Show Out’ and ‘Smoke A Nigga’. Hitmaker Dr. Luke and protege Baby E ape his sound on the underwhelming ‘Bounce It’, and the theremin-whistling opener ‘Stop It’ is another sound-alike. Like the lyrics, identikit trap beats tend to get stale: the chopped-and-screwed key change on ‘So Much Money’ is less novel by the time the same trick is pulled on a third song.

Which isn’t to say that there aren’t enjoyable moments. ‘So Much Money’ benefits from a singalong hook and a horror-film melody. The Young Chop-produced ‘No Heart, No Love’ re-teams Juicy with brother Project Pat for an updated version of Memphis street tales like ‘Mask and da Glock’; Juicy even comments on the changing game: “These niggas don’t fight no mo’ / Fuck takin’ the high road / Lil’ homie ’bout 16 / Bust a gun with his eyes closed.”

Other guest spots are a mixed bag. ‘The Woods’ is the type of shifty Timberlake / Timbaland track that was desperately missing from The 20/20 Experience, and it works here. ‘Scholarship’ benefits from an appearance from A$AP Rocky, and while Wiz Khalifa’s appearances are mostly forgettable, his hook on ‘Talkin’ Bout’ is reminiscent of vintage Bone Thugs. However, the less said about ‘Bounce It’ the better, and, unfortunately, the album’s best guest verse (Trina’s turn on the 2 Live Crew-sampling ‘Having Sex’) is relegated to a bonus track.

Juicy J has spent the the last few years tweaking his style to better suit Southern hip-hop du jour, successfully morphing from ex-Three 6 Mafia frontman to trap rap mascot. By embracing the codeine-weed-molly trifecta, hashtag-friendly hooks, and — perhaps most significantly — ascendant producers, the 38-year-old rapper has maintained rap relevance, even as that has become more difficult than ever. If the album doesn’t say much more than “I’m still here”, that’s fine: Stay Trippy is a victory lap.