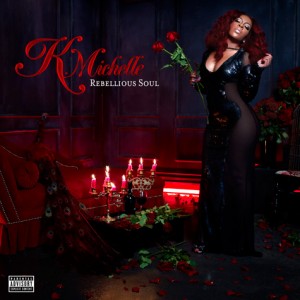 Maybe it’s because it’s 2013 and this is how the game goes now, but in no other year could an r’n’b singer openly go on a reality TV show to get a record deal and not only come out unscathed, but succeed. After dramatic stints on VH1’s Love & Hip Hop: Atlanta, K. Michelle signed to Atlantic and released her debut album Rebellious Soul to largely unexpected success. Commercially, it’s sweet vindication. After reported abuse at the hands of her former manager, label troubles and five self-released mixtapes, Rebellious Soul marks a transformative period in the Memphis-born singer’s life: representing her straight-talking ways with a marked honesty that’s still ringing in the r’n’b consciousness since Kelly Rowland’s ‘Dirty Laundry’ drew in sharp breaths.

Sonically, it’s a fairly enjoyable (if restrained) collection of r’n’b. There’s the steady swaying bass lines, sprinkles of piano melodies and gooey accompanying vocal harmonies, all harking to elements of ’60s soul and the usual flecks of Motown-esque gold. The instrumentation also balances out the chintzy naffness of some modern r’n’b’s preference for synthesised big band orchestration, in part through K. Michelle being a classically trained pianist. It’s a pleasant addition – as Michelle’s powerhouse vocals are front and centre throughout, the album could have slipped into pastiche or banality had she been accompanied by a less robust backing.

The highlight throughout Rebellious Soul is K. Michelle’s voice. It’s a suitably bold accompaniment to her persona, both doing their utmost to show different sides of the singer across the album’s track list. ‘Pay My Bills’, ‘Ride Out’ (a passionate, rap-indebted standout) and ‘Can’t Raise A Man’ paint her as a boss laying down the law of love to future boos, but there’s also admissions of self-loathing and jealousy on ‘I Don’t Like Me’ and a longing to become a doting wife on ‘When I Get a Man’ (which sounds more back-seat than passenger side in its vision of domestic bliss, jarring against her insistence on independence elsewhere). The balance works well right up until ‘Sometimes’, which can claim the weirdest, most jarring two minutes on an r’n’b album I’ve heard in years.

It becomes apparent mid-way through Rebellious Soul that while being classically trained gives Michelle some gravitas, her vision of how to incorporate this into an r’n’b setting can jar horribly. After spending the first part of ‘Sometimes’ lingering over the beat with a welcome range and richness, she launches into a faux-operatic flurry that will never make me hear the word “coochie” the same way again. Whereas r’n’b oddity Trapped In The Closet stemmed from R Kelly’s genuine bizarreness, it feels forced, misplaced and indulgent in an otherwise nicely arranged record, and whatever it was trying to achieve, I don’t think it had my screwface in mind. Flop moments aside though, Rebellious Soul ticks the prerequisite boxes of classic r’n’b: confessional tales of love, loss and longing sung with passion and sincerity.