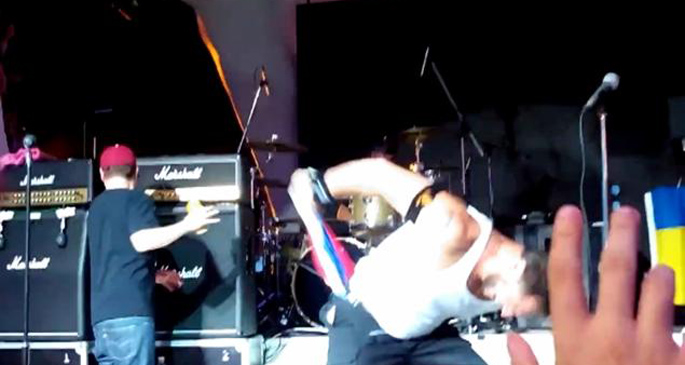 US rap-rock hooligans Bloodhound Gang are in a spot of bother after bassist Jared Hennegan was seen desecrating a Russian flag on stage in Ukraine.

Performing on July 30 in Kiev, Hennegan alledgedly (depending on who you believe) either pushed the flag down his underpants and launched it into the crowd or urinated on it. Either way, the band is now under criminal investigation by Russia, who posted this statement on the website of their investigative committee:

“According to the findings of the comprehensive psycho-linguistic forensic examination, Hennegan’s actions committed with the use of the national flag of Russia are derogatory in nature and can be perceived as a desecration of a national symbol,” it continues “Moyer, Hennegan, and other unknown persons entered a criminal plot aimed at disgracing Russian citizens and formed a criminal group to that end.”

Accused of “inciting enmity and humiliating human dignity,” a crime that carries a sentence of up to five years, it doesn’t look like Russia are about to drop the charges. Who knows, maybe the US can broker a deal for Edward Snowden after all? [via Billboard]