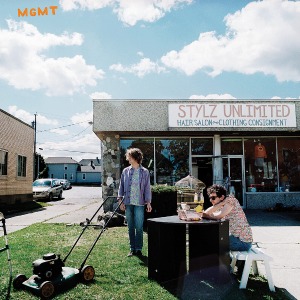 You can’t help but feel for those ageing indie boys out there playing MGMT for the first time. O, the crushing disappointment. Memorial Klaxons mug in hand, there they’ll sit, holding their breath for the triumphant return of ‘MGMT: the synth-pop band’ and the album fated to render MGMT’s nutty predecessor Congratulations the bad practical joke they always knew it to be – only to be met with track one, ‘Alien Days’, and what can only be described as the Fingermouse man’s Renaissance-era ode to stinky hippy-folk, with nary an ’80s stadium-pop hook in sight. The type of fungal English psych that ’70s Donald Sutherland made love to; those scratchy woollen lapels thrusting rhythmically atop the lily-white belly of some bushy Home Counties rose.

As of now, the MGMT of Oracular Spectacular is officially dead and gone, the pop stylings of Benjamin Goldwasser and Andrew VanWyngarden’s debut now a distant memory, along with the last vestiges of what was, prior to now, their other chief influence: mid-Atlantic indie rock. And you gotta give it to them. With the eccentric psych-rock flop that was 2010’s Congratulations, the Brooklynites turned their back on their debut’s million-selling hit sound in the name of good old-fashioned artistic integrity, only to turn up five years later with MGMT, a record that if anything is more impenetrable, at least as far as your average indie fan is concerned. And, well, how’s that for sticking it to the man?

Inevitably there’s one very big catch, which is that, for all their integrity, the further MGMT stray from pop music the more nondescript their sound becomes, leaving the impression of a band of would-be auteurs lost for a voice of their own. On this, their third studio album, the pair borrow liberally from ‘neo-psychedelia’, a sound that came out of North America at the turn of the century and a haunting attempt to re-invent traditional psych rock through the prism of Gen X ennui.

More specifically, MGMT shares much in common with the doe-eyed, synthetic Anglo-folk of The Flaming Lips and, to a lesser extent, Grandaddy’s brand of electronically bolstered Neil Young-isms. So it comes as no surprise that neo-psychedelia’s definitive producer (and regular knob-twiddler for The Lips) Dave Fridmann handles production duties here. While Fridmann’s production on Oracular Spectacular was far from determinative, here his signature style of mucho reverb and diaphanous textures more or less defines MGMT. So much so, in fact, you get the impression that the band conceived the songs with Fridmann already in mind.

With its acid-doused synths, helium-electronic vocals and retro-anime futurism, ‘Mystery Disease’ is MGMT’s most Lips-ian cut, while ‘A Good Sadness’ is the resident Grandaddy facsimile – a sweetly melodic but quietly epic journey across a digitising American heartland, capturing of all the weary, pretty despair that was The Sophtware Slump. ‘An Orphan Of Fortune’, meanwhile, goes as far as to ape Fridmann’s own band, Mercury Rev, while adding an array of modernist synth settings, prominent bass and an oppressive cloud of FX. VanWyngarden also mimics Mercury Rev singer Jonathan Donahue’s child-like falsetto throughout the album.

Elsewhere, ‘Cool Song #2’ recalls The Beta Band, all big beats and fey existential melancholy, while ‘Introspection’ is a return to Congratulations’ Television Personalities-inspired twee-punk. It also happens to be the closest thing to a song here, which is only logical considering it was TVP’s shambolic but razor-sharp songwriting that inspired many of Congratulations’ poppiest tracks. Kicking off the album’s weirder second half is ‘Your Life Is A Lie’, which takes its cue from Ariel Pink’s absurdist ad-jingle psychedelia, followed by the equally bizarre ‘Plenty Of Girls In The Sea’, reminiscent of The Beatles in full trippy nursery-rhyme mode (‘Yellow Submarine’, ‘I Am The Walrus’, etc), yet further warped by Fridmann’s subaqueous production.

MGMT is a perceptibly denser, more detached and altogether more awkward version of neo-psychedelia than was ever produced by The Lips or Grandaddy, but rarely in a good way. The overdriven levels and convoluted layering serve to negate the lyricism Grandaddy conjured from slightness and simplicity, while by blending quintessential neo-psych instrumentation with fusty trad-psych signifiers (flute, organ, etc), the duo take away from The Lips’ poignant futurism, which is kind of tragic given that Wayne Coyne’s vision of our collective fate – a prophecy at once hopeful and hopeless – is pop at its most inexplicably magical.

Incorrigible hipster posturers that they are, there was always something self-conscious about MGMT’s eccentricity on Congratulations. And the possibility that this same creative cynicism might tarnish the music of such a miraculously unaffected, genuinely wonderstruck group of artists as the neo-psych set was, to say the least, disconcerting. The good news is, MGMT is by some margin the New Yorker’s most intuitive, sincere and naturalistic record. The bad news is that it’s not at all musically interesting – and when a band finally eschew artsy conceptualism for something more naked, and the result is both derivative and mundane, you can only deduce that despite the ingenious pop nous demonstrated on their debut, MGMT were never really artists in the first place.