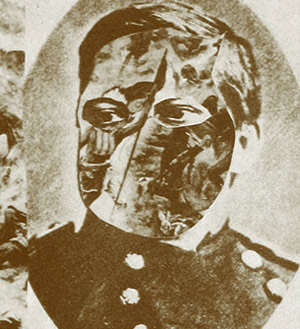 When asked in an interview what he expected from dance music in the future, producer Brian Leeds said he’d like to see “a move towards all encompassing ancient techniques and alien sounds, always moving forward.” There’s a revealing slippage in his reply, between the obscured past and the unknowable future – between the “ancient” and the “alien”. Colonial Patterns, Leeds’ debut album, fixates on the pre-colonial civilizations of the producer’s native Midwest, and the moment of European contact that would alter them irreparably. But the world he evokes isn’t some untouched Eden so much as a site of (perhaps) surprising technological accomplishment: track titles reference the thriving trade systems (‘Hopewell (Devil)’) and prosperous civilizations (‘Quivira’) of the era, or draw links between pre-Columbian earthworks and sci-fi friendly concepts from the present day (‘Monks Mound (Arcology)’).

Often, too, Leeds has spoken about his music-making as a process of unearthing “artifacts”. He means the word in the musical-technological sense – referring to the audio errata generated through extreme signal processing – but it’s tempting to draw on its other definition (and several journalists have). Often these tracks bear a kind of faded opulence, as if they are once-gleaming remnants of Detroit techno’s golden age, left to decay on the Midwestern prairie. The aforementioned ‘Quivira’ is a barren stepper’s rhythm, its hihats rusted from neglect, its pads windswept. The murky drone of ‘Chun-Kee Player’ crumbles to the touch, while closer ‘Angel (Phase)’ is sun-bleached almost to the point of translucence. Bleaker still, ‘Anagramme of My Love’ is seemingly built from little more than dust and wind – as if the last traces of life have been swept away, leaving only vacant landscapes.

Still, while Colonial Patterns is, at least implicitly, a critique – both of revisionist New World myth-making and of techno’s discarded utopian ideals – it’s not an entirely gloomy record. Leeds’ past productions, for the likes of Future Times and Opal Tapes, have always contained a subtle but infectious funk, and it’s present here in tracks like ‘Ragtime U.S.A. (Warning)’, or ‘Prinzif’, whose busted-VHS horror-movie opening re-emerges as something brighter, warmer. Elsewhere Leeds takes a refractory angle on his favoured form, spinning us off into wombing, subaquatic space in a manner similar to Basic Channel – as with the bleary-eyed ‘Plucked From The Ground, Towards The Sun’, or the scintillating ‘’Iińzhiid’.

Perhaps it’s the range of this record that is most impressive: the US dancefloor renaissance of which Leeds is a part has been largely singles-focussed so far, and few of its proponents seem capable of producing an album as diverse as this. But there’s a consistency and a vibrancy shot through these tracks, too. Leeds isn’t mourning something lost so much as constructing his own speculative fiction, a bootstrap collage of past and present, real and invented. To ask whether it’s “moving forward” seems oddly moot; like much of the best music of recent times, Colonial Patterns sits outside of chronology, peering fascinatedly in.