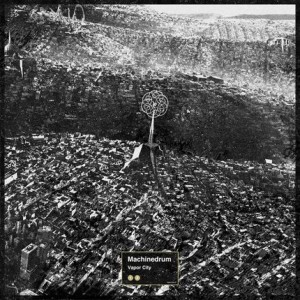 The Prefuse 73-style IDM-hip-hop of Machinedrum’s early noughties output offers few hints as to the path his career would take. Even now, Travis Stewart may seem an unlikely candidate for the status of dancefloor-hip paragon. His transformation can more or less be attributed to a single LP: 2011’s Room(s). Newly inspired by Chicago footwork, Stewart’s Planet Mu debut blended the style with the giddy uprush of jungle – a lifelong love – and gave it a slick, hi-def sheen. If the results perhaps leaned a bit too heavily on sampled-RnB vocal hooks, then it was a crossover gambit that worked, cementing Stewart’s place among a new generation of footwork hybridists.

Stewart has since migrated from New York to Berlin, and keeps a number of on-trend projects bubbling under: rather anaemic Hotflush-signed UK bass as one half of Sepalcure; an EP alongside Jimmy Edgar under the JETS alias; incendiary jungle-footwork gene-splice with Om Unit as Dream Continuum. Vapor City, however, is his first full-length solo effort since the album that made his name and, appropriately given its release through Ninja Tune, his most ambitious LP to date. Put simply, it’s a concept album: each track apparently represents a different district in a fictitious city, and each will be accompanied by a deluge of additional content in the months following release (there’s even talk of an installation). The accompanying live show, meanwhile, will feature Stewart playing guitar and singing alongside a live drummer.

But while Stewart has long displayed slightly unsettling confessional indie tendencies (fingerpicked guitar and tremulous vocals were a quiet but significant presence onRoom(s), and they recur in places here), this record is no more a bid for crossover respectability than its predecessor. Less so, in fact. Yes, those vocal hooks, autotune-garbled and glimmering with reverb, are still a feature. And there are a few instances of barefaced anthemry – ‘Don’t 1 2 Lose U’, say, or power-pop-in-a-drained-swimming-pool ballad ‘U Still Lie’. But for the most part these arrangements are, thankfully, subtler, more restrained than those found on Room(s).

These darker, punchier moments are welcome, having been missed on the fluffier Room(s). But Stewart doesn’t entirely abandon his taste for the saccharine, either – nor would we want him to. ‘Center Your Love’ evokes New Age therapy sessions in both title and music; this is Boards of Canada if they’d gone full candyfloss. ‘Vizion’ trades in Burial-esque windswept ambience, but it’s warm and inviting rather than achingly bereft. The gorgeous ‘Infinite Us’, meanwhile, is a penthouse suite update of jungle euphoria, its richly layered piano and guitar chords spiralling ever-upwards with uncanny Shepard tone-like grace. Only on egregiously smooth closer ‘Baby Its U’ does Stewart misjudge the mood; otherwise these tracks are, yes, ridiculously easy on the ears, but absorbingly so.

One final sigh of relief: through all this, there are barely any nods to Vapor City’s founding concept – no hackneyed urban soundscaping, schlocky evocations of Chinatown, say, or the financial district, no bolt-on narrative. On paper Vapor City looked like Stewart’s descent into a sump of his own pompousness; in reality it’s anything but.