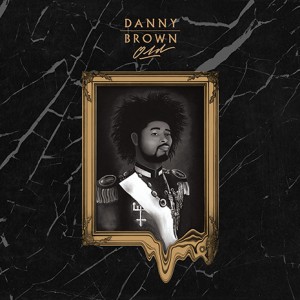 When Danny Brown dropped XXX in 2011, his star was positioned in a very different place. He’d been chomped up by the industry and regurgitated as a hushed hipster buzzword, bundled with the nascent A$AP Mob and saddled with a failed 50 Cent hookup that belied his neon-flecked dress sense. He was a click-inducing Vice headline and the blog-rap poster boy, and the idea he could actually transcend that scene seemed almost unthinkable. Since then, however, the improbable has become reality and thanks to an unshakable work ethic and an unmistakable, constantly evolving flow Brown has managed to shake off the shackles of the underground and blossom into a minor rap icon. He’s proved that in the age of quick fixes and worthless reality television, the age-old mixture of rarified talent and a tour schedule Slayer would find excessive can still push you into the big league.

With fame, however, comes great responsibility, and the breathless anticipation for Old has, over the last few months, been amplified to a loud roar. It would have been very easy for Brown to cobble together a bunch of ‘Die Like A Rock Star’ pastiches and call it a day – after all it’s the energy of the live shows that’s been bringing in the punters, isn’t it? Thankfully this was never an option, and we’re instead left with a sense that Brown is one of a rare number of rappers who still treat an album like an event. In rap, now more than ever, the traditional album is all too often sidestepped in favour of a loose collection of crowd pleasers and old mixtape favourites peppered with a few choice guest spots to keep the suits in check, and Old is anything but.

Brown has cited Joy Division’s Closer as a major influence, and that doesn’t mean he’s filled Old to the brim with grizzled, breathless post-punk either. He’s thinking of the bigger picture, not only in terms of the album’s production and narrative but also in terms of its legacy. This is achieved with help from a well-worn technique as Old is split into two distinct halves. On Side A, he allows himself to explore the past, both musically and lyrically, and he does so without resorting to the rubber-voiced screech that so often characterizes his appeal. He elaborates on frequent topics of discussion – he sold drugs (’25 Bucks’), he had a tough childhood (‘Wonderbread’) and he’s seen shit that would send shivers down the spines of serial killers (‘Torture’) – and each topic is elaborated on and underlined with a masterful ease.

This was the side of the record I was most worried about – rap  gets all too often mired in its storied past, and it would have been easy to get tangled in the usual ‘conscious’ barbs, but aided by some seriously on-point production from Paul White, Oh No and SKYWLKR Brown emerges shockingly unscathed. So well handled is the production throughout Old, in fact, that when we lurch into Side B with the vivid Rustie-produced ‘Dope Song’ there’s barely a flinch. The track’s mood is a 180-degree turn from the reflective first half, but makes sense, as if Brown had intended to set up firm foundations before launching back into the hedonistic drug raps that have served as his calling card in the last couple of years. And those chemical tales sound better here than they ever have – ‘Dip’ turns Freq Nasty’s ‘Da Dip’ into a paint-splattered MDMA anthem, and ‘Break It (Go)’ is a shining example of the raw energy that most rappers simply can’t hold a candle to. It’s not all good news – ‘Dubstep’ is entirely avoidable, mostly thanks to its cringe-inducing chorus (“I had them dubs on the step”), but that’s a small blemish on an otherwise consistent record.