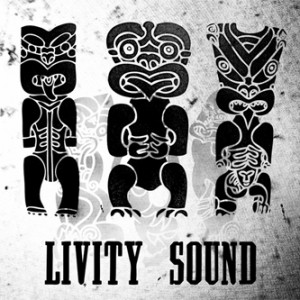 Even in 2013, dance music is still local music. The ease of international travel and the internet may have given rise to all sorts of international and cross-genre pollination, but the sound of Bristol’s sub-heavy club music is unmistakable. Among its most vital artists are Peverelist (Tom Ford) and Kowton (Joe Cowton), who have released a steady stream of 12″s both on local labels – Punch Drunk, Idle Hands, Tectonic, and so on – and others outside Bristol that share aesthetic ideals, like Hessle Audio, Keysound and All Caps. Their solo and collaborative 12-inches on Livity Sound, the label they run with Asusu (Craig Stennett), form their first self-titled compilation.

With Bristol’s soundsystem culture a constant reference point, Pev, Kowton and Asusu distill icy strains of grime, dubstep and techno into screwfacing hybrids that embody a specifically local sound. This is bodily stuff: the snares on tracks like Pev and Kowton’s ‘Vapours’ crack you around the face, while the sub-bass on Asusu’s ‘Rendering’ grabs you by the throat and doesn’t let go for nearly seven minutes. For all their propulsive rhythms, tracks like Pev and Kowton’s ‘Raw Code’ and ‘Too Much Time Has Passed’ by Asusu are shot through with potent dread, all spine-liquefying low end and kick drums that hit with the force of a jackboot to the sternum.

Livity Sound does a good job of shedding some light on the differences as well as the affinities between the three producers. Pev favours hypnotic percussion on ‘Erosions’ and ‘Aztec Chant’, while the bruising kicks and yawning acres of space on ‘Saltwater’, his and Kowton’s ‘Junked’ and ‘Beneath Radar’ (Pev Version) betray Bristol’s dub heritage. Grime’s melancholic string phrases regularly creep into Kowton tracks ‘Raw Code’ (with Pev) and ‘More Games’ – which also does wonderful things with gunshots – and Asusu contributes the sparsest and most dancefloor-inclined tracks of the three. His and Pev’s as-yet-unreleased ‘Surge’ is something of an outlier, built around a siren wail and painfully high squeals. It’s one of the most exciting tracks on here, and an encouraging sign that some of the Livity trio’s best music is yet to come.

Given that it’s essentially an hour and forty-five minutes of peak-time bangers, Livity Sound is also well sequenced, opening and concluding with Pev and Kowton’s mixes of ‘Beneath Radar’. That said, the context of a 2CD compilation means some moments are bound to be weaker than others. ‘Rendering’ is a shattering club track, but here it’s just a bit too utilitarian to stand out, and I wish Kowton had more than one solo track on each disc. Still, it seems crass to nitpick; if anything, Livity Sound highlights the uniformly high quality of the three producers’ music and the naturalness of their collaborations. As anyone who’s spent a night lurking by the subwoofers knows, these tracks have the power to rearrange internal organs. Uncomfortable though that may sound, it’s a pleasure to experience.