The robots are dancing: how Conrad Shawcross and Holly Herndon built the stunning Ada Project 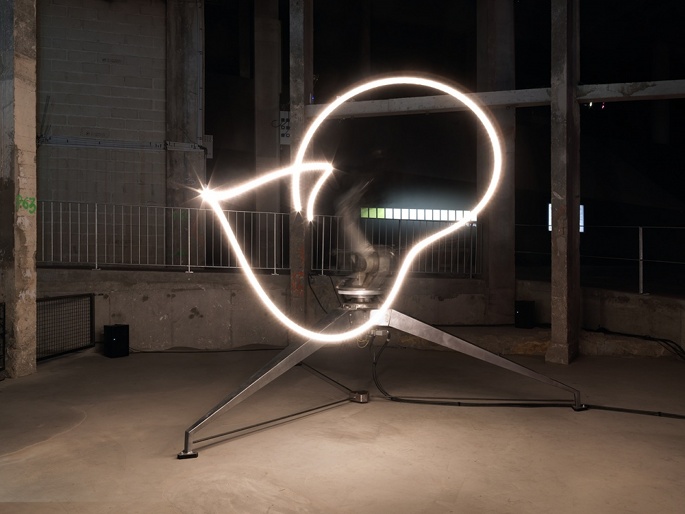 For the past several weeks, a robot has been dancing at the Palais de Tokyo.

Wrapped up in its own private ballet, the sixteen-and-a-half foot tall metal behemoth has gambolled and gyred through an elegant choreography, deep in the bowels of the Parisian art institute. For the robot, this must have been a very strange experience. We’re not talking about Sony’s agile QRIO androids or some shimmying extra from an episode of Soul Train. Before British artist Conrad Shawcross got hold of it, this particular robot, scarcely more than a giant metal arm, would have done little more than paint-spraying and tack-welding in a car factory. “It would move along, it would go bzz. It would move back, it would go bzz,” says Shawcross, who programmed the graceful arcs traversed by its looming steel joints. “I think if the company who originally built it saw this robot they would be pretty horrified.” The music it’s been dancing to was composed especially for it by Holly Herndon.

Herndon spent a week in Shawcross’s studio in Hackney, living upstairs while spending her days singing to the robot in the sitting room, sweeping microphones across its engines and composing on the fly in response to its elegant seesawing movements. Shawcross’s co-curator Ken Farmer points to the way Herndon’s work traverses “composition, and sound design, with playing at Berghain” as one of the elements that drew them to her for this project. “She’s able to turn the computer into a performative instrument rather than something you kind of hide behind,” he adds. But Herndon is only one of a number of female composers to be commissioned to create new work in response to Shawcross’s robot. The first was London sound artist, Beatrice Dillon, and in the near future more works are expected from Mira Calix, and from Tamara Barnett-Herrin of the Freeform Five, among others.

“I think if the company who originally built it saw this robot they would be pretty horrified.”

“In 1833, a teenage girl met a machine which she came to regard ‘as a friend.’ It was a futuristic device which seemed to have dropped into her world at least a century before its time.” Shawcross read those lines, from the beginning of Sadie Plant’s acclaimed 1997 book Zeros + Ones, when he was still a student. For a long time he remained captivated by this image of a “lone female” confronted by a vast machine. “It’s about the power and the sensuality of it,” he tells me, “the strangeness…” The teenage girl in Plant’s book was Ada Lovelace, Lord Byron’s daughter who would become known as the Enchantress of Numbers and the ‘first computer programmer’ for the extensive work she did with Charles Babbage’s never-quite-realised proto-computer and inspiration-for-all-steampunk, the Difference Engine. Such a machine, Lovelace wrote “might compose elaborate and scientific pieces of music of any degree of complexity or extent.” From Shawcross’s reading of that book came the germ of what has now developed into the Ada Project.

More than just a single exhibit in a single gallery, the Ada Project is to be an ongoing programme of residencies and collaborations, travelling across the world. Before long, the robot and its soundtrack will leave the Palais de Tokyo and cross the ocean to take part in the annual music festival of the Museum of Old and New Art in Hobart, Tasmania. The whole thing started with a commission from the National Gallery to create a ballet to music by Nico Muhly in response to a painting by Titian. Shawcross brought his robot onto the stage in a dance-off with the Royal Ballet’s Carlos Acosta. But the experience bred a desire to go further. How, he wondered, would a robot dance if it wasn’t following someone else’s tune?

A lengthy research process ensued. Shawcross hacked deeper into the robot’s software, wanting to give it the flexibility to do “it’s own thing”. Staff at London’s Science Museum gave him access to Babbage’s original plans for the Difference Engine. “Hundreds of pages of wheels within wheels,” Shawcross tells me rapturously, “there’s 7,000 cogs in it or something. An insanely complicated thing that’s not really achievable now, let alone in his time.” Seeing here a kind of android archaic heritage, Shawcross used the ratios in Babbage’s blueprints to design the dance steps for his own machine, and those steps would inspire in turn the work of his musical collaborators. 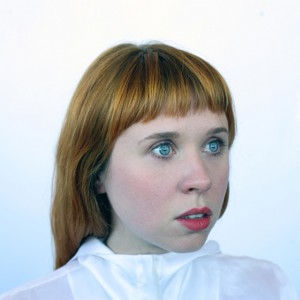 Crucially, the Ada Project aims to go further than even Ada herself imagined. Lovelace had cautioned that Babbage’s machine could have “no pretension to originate anything.” It simply does “whatever we know how to order it to perform.” But Shawcross hoped his robot would act as “a primary source of inspiration”. In a striking reversal of roles, he imagines that “the robot is the player and the musician is the theremin, and they have to vocally respond to the machine.” For the artist, the switch presents a novel and potentially fruitful “tool for creating music” comparable to the way jazz musicians a century ago responded to the rhythms of industrial America. And as Ken Farmer drily points out, as far as writing music to the beat of a mechanical device goes, the toroidal sweeps of the robot are “a little more interesting than a metronome.”

Since installing at the Palais de Tokyo, the ever-in-demand Shawcross has kept himself busy by transforming the Camden Roundhouse into a giant clock and is currently preparing for a new show in Italy. Meanwhile Farmer has been causing controversy in his role as creative director of New York’s Nuit Blanche. A film project in collaboration with Demolition Man-director Marco Brambilla, due to be projected on the façade of the Bowery’s New Museum, was censored by the city authorities and remains yet to be screened. But Ada soldiers on, from Paris to Tasmania and beyond, with ultimate plans for the musical responses of Dillon, Herndon, Calix and all to be compiled on a limited edition release from the Vinyl Factory.

“One of the really gratifying things about this for me,” Shawcross tells me, “is that, when I first saw one of these robots I was sort of terrified of it but also in awe of it. I was threatened by it as an artist because it was in a carving studio and I saw that as a potential usurping of the role of the artist. But now I’ve got very immersed in how to control them. I can move my hand in a straight line easily without any effort and it’ll take me a few hours to programme the robot to do that. But I understand how to do that with the robot better than I understand how I can do that myself. I have actually no clue how I do that. So the robot doesn’t threaten me anymore, it just teaches me how little I know about myself.”