And this one time… the best Bandcamp releases of the month: October 2013 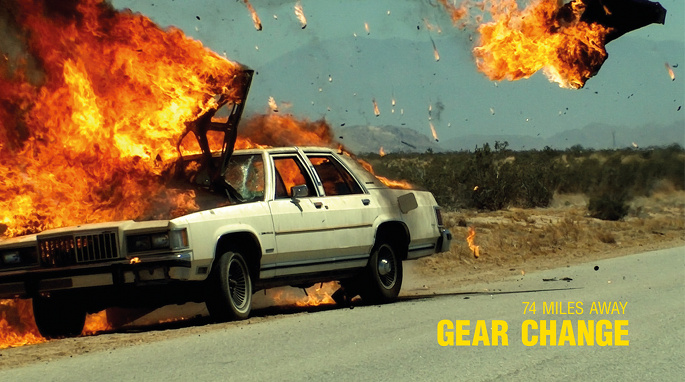 In the dystopian science fiction movie/mockumentary Ghosts With Shit Jobs, the current plight of email spam is taken to what feels like its logical next level: it becomes human. People are paid to physically spam others in everyday situation via subtle mentions of products and services. A “cha-ching” sound indicates a successful spam, earning the spammer money. The industry is, of course, controlled by a Nigerian cartel, and features high-end spammers like the central character in that particular mini-story, as well as “cheaper” ones who literally walk up to you and throw their spam in your face.

As far as I can remember spam has always been a feature of my digital experience: a pain to a certain extent, but also a provider of increasingly hilarious and fascinating situations that has also given rise to new forms of poetry and insights into AI and digital intelligence.

As Ghosts With Shit Jobs hints, spam is also increasingly becoming human. Last week, I received a message via my Bandcamp page (don’t worry, I won’t spam you with it). At first glance it seemed human, and therefore legit, so I clicked through and read it. The person who’d sent the message was explaining how some of my label’s music featured the SP-303 sampler and therefore I may be interested in his release. The kicker: he doesn’t ship worldwide, the release is two years old with what appears to be barely any sales, it’s musically not particularly endearing, and English was clearly not his first language, nor was writing his strong point. I got spammed. And it felt weird.

It felt weird because it further highlighted the blurring boundary between human and machine spam. This was clearly a real person at the other end of the digital line, reaching out in a way that on the surface felt legit. Yet everything about his approach felt like textbook robotic spam, down to the desperation underlying the entire effort.

While it’s increasingly easier to protect yourself against automated spam via algorhythms and other tools, human spam such as the one that caught me is only going to increase as we make more use of ‘closed’ services and platforms like Bandcamp and others. That is, until the day we find ways to protect ourselves from it, and the only outlet left is face-to-face interaction.

This month’s column features old-to-the-new analogue funk from Belgium, neck snapping beats and raps from the US, archival electronic wizardry from Holland, digital strangeness from Dublin, dancefloor vibes from Scotland, grime from London via Australia and, of course, spam. Enjoy

Despite being PR’ed with the increasingly tired idea of the artist being a ‘mysterious producer’, this EP by Scottish artist Cain is remarkably enjoyable in its mixture of textures, rhythms and samples. The five tracks strike a fine balance between dance music and hip hop tinges, and there’s a very pleasant and well-executed scratch solo on ‘Blainn’, a straight up throwback to the glory days of the ultra-niche and insular scratch beats scene. This led me to discover that, despite the mystery surrounding him, Cain used to be an ex-DMC scratch nerd. The EP is rounded off by an LV remix, following their support of his first release. Titled after the old Slavic word for nightmare, Mora is an engrossing EP and a fitting introduction to Cain’s sound. I’ll definitely be looking forward to more.

Teishi-1’s Sunshine Hexagon release is a strange and hypnotic compilation of short tracks, with no context other than its geographical location (Dublin) and texture (electronic). I’d wager the tracks on here are likely demos or rough ideas, and despite the shortcomings this might imply, they manage to connect with the listener quite nicely. The majority of the music on here leans towards hip hop grooves, slightly broken rhythms, and hypnosis through repetition and sample abuse. All of which works a treat as far as I’m concerned.

Here’s one for the old UK hip hop heads. Remember Ghost? Ten years ago, the British producer was one of the more consistent behind-the-boards figure of the UK scene, producing beats for the likes of Tommy Evans, Verb-T and Kashmere and releasing on Breakin’ Bread among others. Since then, he’s relocated Down Under, and following a break from the whole music thing due to some life issues (check the beautifully haunting A Tale of Life in VI Parts), he’s recently started to put music up on Bandcamp again. Ghost’s approach is now notably wider, with the producer trying his hand at more upbeat and electronic styles.

Geesus Host Remixes #1 compiles three, you guessed it, remixes of tracks by Grime and rap artists, including Merky Ace and P Money. The vibe is dark and dirty and, even if he’s no longer near the Big Smoke, Ghost clearly still knows how to channel the capital’s grimier energy.

ROEL FUNCKEN
From The Archive

Roel Funcken is one half of Dutch duo Funckarma, a production outfit responsible for a string of pioneering releases in the ’00s that hinted at the fusion of hip hop, dancefloor and electronic aesthetics that would dominate the end of the decade and the beginning of the next. Oh, and they were also responsible for the beats in Shadow Huntaz, whose mid ’00s releases on Skam still sound incredibly relevant today.

As the name suggests, this release is a compilation of tracks from Roel’s archives, spanning a ten-year period from 2002 to 2012. Included in there are collaborations with Belgian offbeat masters Hermutt Lobby, Cyance and more. By his own admission, these are all tracks that would never see the light of day otherwise, and yet the quality on offer is equal, if not superior at times, to a lot of what passes for legitimate releases in the worlds of hip hop and electronic. Touching on ambient, electro, dubstep, hip hop and more, From The Archive makes for a fascinating insight into the musical mind of one of Holland’s best kept secrets.

L.A’s maestro of the neck snap returns with a collection of beats intended to showcase the diversity of his production chops. Not a surprising move: Dibia$e could be forgiven for feeling pigeonholed into one particular style following the success of previous releases once the L.A beat bubble burst these past few years.

Across ten tracks, Dibia$e reminds us that not only is he capable of more than 8-bit cartridge beats (his words), but he’s also mastered his craft in such a way that his style is almost instantly recognisable. A perfect addition to this new release is his recent Boiler Room LA set.

I was introduced to Pennsylvania MC Stainless Steele by London-based Infinite Potentials, following his 2009 album My Top Friends Are Beat Makers, an album that was both made possible by and dedicated to the glory days of Myspace – the social network that was so much more than just a place for friends to an entire generation of budding musicians.

Nothing Is Sacred… is his latest album, continuing to focus on the rawer and bumpier side of hip hop. Steele’s lyrics and flow fit the sonic backdrop perfectly, showing his own artistic progression and proving that while the formula might have been beaten to death, there is still scope for some dope shit.

Belgian quartet 74 Miles Away combine the talents of a jazz pianist, production duo and flautist to create a heady mix of old and new that taps into everything that makes you feel good about jazz, soul and beats. Having released on Cologne’s MPM and London’s Brownswood, their latest release comes with the support of Brussels’ Laid Back, and sees the quartet delve deep into their influences and current interests. Across eight tracks, Gear Change covers dedications to greats like Bob James and Weather Report, ’80s boogie and modern beats without ever sounding clichéd. The title cut is a particularly funky highlight, sure to perk up anybody’s day.

Searching for the perfect tag
OSCILLATOR
Trail Of Sixes

In keeping with the theme of my introduction, this month’s tag release comes to us via the ‘spam’ tag. I’ll admit when I first thought up the idea I felt genuinely excited by what I might find, only to realise that while Bandcamp did have a spam tag, it mainly led to a random assortment of songs with lyrics culled from emails ranting about the first world plight of email spam. Then again, I should have figured it would end up like that.

Among all this, and thanks to the keen ear of my friend Primus Luta, I did find Oscillator, whose Trail of Sixes demo is only 40 seconds long, but definitely the most interesting of a weird bunch. Sounding like an electronic car crash with a dash of plunderphonics, I think I like it even more for the string of tags which ends up in ‘rave spam UK’. Now that’s a genre I could get behind with my dystopian hat on.