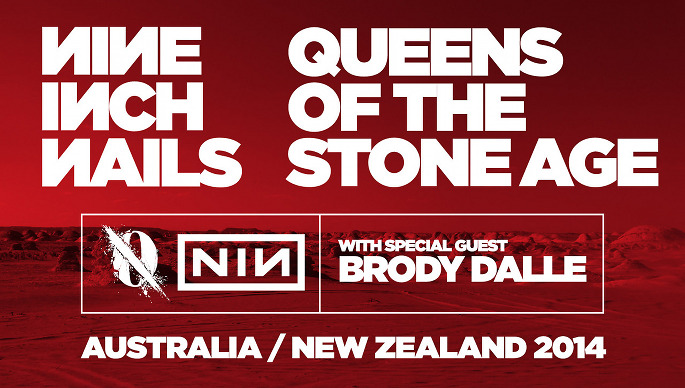 Two of contemporary rock’s bigger beasts will pool their resources on a forthcoming tour Down Under.

Nine Inch Nails and Queens Of The Stone Age have both had pivotal years, dropping a new album apiece (Hesitation Marks for the former, …Like Clockwork for the latter) and embarking on separate world tours.

As NME note, the two acts will tour Australia and New Zealand together as co-headliners in March 2014. Reznor and Homme haven’t had to clash antlers for the top spot on the bill: rather charmingly, each night’s headliner will be decided by coin toss. The news arrived on the Nine Inch Nails Tumblr, which is hosting the following message:

“The first headline band on stage will be decided each night by the toss of a coin. The eight date run is set to begin at the Sydney Entertainment Centre on 6 March, 2014 and continue on visiting Newcastle, Perth, Adelaide, Melbourne, Brisbane, Auckland and Christchurch.”

The bands will also be joined on all the dates by ex-The Distilllers front woman (and Homme’s spouse) Brody Dalle, who is currently prepping her debut solo album. The full list of tour dates is below. Jay-Z, we’d wager, isn’t invited.