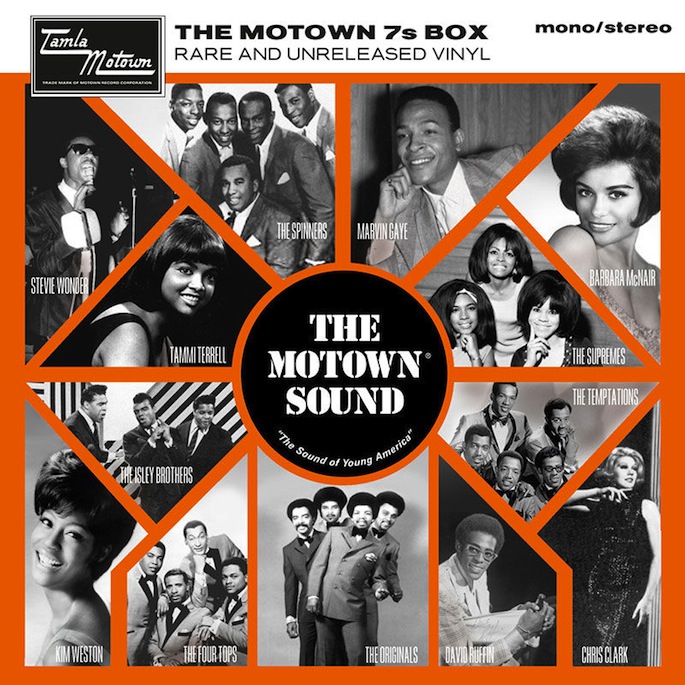 The previously download-only single joins rarities by Marvin Gaye, the Four Tops, the Isley Brothers, and a copy of a single that recently sold for £25,000.

Motown 7s – Rare and Unreleased (due out November 18) tackles a familiar target — the Motown catalog — in a new way: by offering seven 7″ rare and unreleased singles by the label’s household names (Gaye, Diana Ross, and more) and lesser-known, collectors’ favorites (The Originals, Chris Clark, The Spinners, Tammi Terrell and David Ruffin).

Among the gems included: Stevie Wonder’s ‘Just Enough To Ease the Pain’, which is being released on vinyl for the first time, and Frank Wilson’s ‘Do I Love You’, a single that was withdrawn after its initial 1965 release; an original of the latter recently sold for over £25,000.

The set was curated by DJ and broadcaster Richard Searling, who explains the origins of some of the tracks included. Searling says that “the Stevie track has only ever previously been a download,” while the The Four Tops and Ruffin songs come from cancelled album projects.

The tracklist for Motown 7s – Rare and Unreleased is below, along with a stream of Wonder’s ‘Just Enough To Ease the Pain’. Wonder recently announced plans for three new albums and a live performance of Songs In The Key of Life. [via The Vinyl Factory]

Single 1
A. This Love Starved Heart Of Mine (It’s Killing Me) – Marvin Gaye
B. What More Could A Boy Ask For – The Spinners

Single 2
A. Do I Love You (Indeed I Do) – Frank Wilson
B. Suspicion – The Originals

Single 3
A. Stormy – Diana Ross & The Supremes
B. Just Enough To Ease The Pain – Stevie Wonder

Single 4
A. Clip My Wings – Four Tops
B. All I Do Is Think About You – Tammi Terrell

Single 5
A. It Happens Every Time – Barbara McNair
B. I Can’t Be Hurt Anymore – David Ruffin

Single 6
A. Forever In My Heart – The Temptations
B. You Hit Me Where It Hurt Me – Kim Weston

Single 7
A. Something’s Wrong – Chris Clark
B. My Love Is Your Love (Forever) – The Isley Brothers