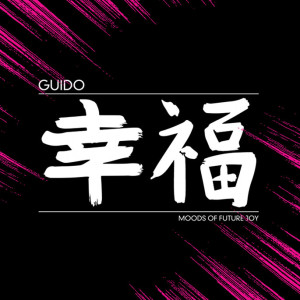 Fixated as it is on the new and allergic to the products of the recent past, dance music culture often doesn’t know quite how to respond when a producer outlasts the hype. There’s no doubting that the so-called “Purple” dubstep movement with which Bristol’s Guido made his name is history. Joker, its most commercial prospect, took a shot at the stars with his 2011 LP The Vision and missed rather spectacularly (though he recently produced his best work in years in the form of this). Gemmy, meanwhile, failed to capitalise on the buzz – a mooted LP for Planet Mu never appeared – but has lately turned his energies to slightly premature legacy-making.

The third member of the triumvirate – and by some distance the most interesting – has a far more healthy relationship with his legacy. Moods Of Future Joy, Guido’s second LP, even features wry nods to past successes. ‘Midnight Savannah’ subtly teases the hook to Purple anthem ‘Mad Sax’; that melody’s contour is detectable, too, in the marvellously gauche ‘Kalm’, which sounds like a dubstep remix of Enya made on one of those budget MIDI keyboards we used to abuse at school. The original – surely the zenith of Guido’s ability to spin crass but compulsive melody from his toolbox of MIDI-orchestral patches and glossy synths – came from 2010 debut LP Anidea, a record which made it clear that Guido had more than one trick up his sleeve.

On that album and since, Guido has stuck to a roughly 140bpm rhythmic framework which many would consider anachronistic. But in his hands it has rarely felt like a dancefloor-oriented end-in-itself so much as a vehicle for something else; namely an inventive synth-pop idiom inspired by turn of the millennium RnB and video game soundtracks in the Final Fantasy vein. Evidently Guido sees it this way too: he recently put together a live band to perform his music, and while such a bid for rockist authenticity often sits awkwardly in dance music, in this case it kinda worked.

So it is that we dive into the uncanny valley once more with Moods Of Future Joy. There’s nothing radically new to these synthetic symphonies, brimming with playful arrangement touches and surprisingly affecting melodicism, but it feels like Guido has refined his craft. As always, Timbaland is a strong presence: throughout in the woody, hip-winding percussion, but more specifically in ‘GEM’, one of two tracks featuring vocalist Emma-Lou. These moments (‘Letting Go’ is the other) are actually the album’s least polished – minor tuning issues and a certain lack of clarity to the vocal make it clear that this is a homespun effort – but then Guido’s aspirations to chart glossiness with humble means have always been a large part of his charm. On ‘Heartful Dodger’ and ‘Lucky Git’, meanwhile, a rather awkward vocoder takes the lead. Both are great nonetheless, the former replete with G-funk squiggles, the latter coalescing into anthemic UK garage of a sort.

Momentum falters somewhat past the halfway mark: ‘NRG’, a more urbane relative of one of TNGHT’s synth-horn hulks, demonstrates that high-octane is not Guido’s strongest mode; ‘Afrika Pt 2’’s pentatonic keyboardry and self-consciously “African” rhythms are a bit of a cringe. But in each case Guido partially redeems himself with his knack for an ear-catching melody. And, even more to his credit, he keeps throwing out new ideas to the very last: closer ‘Squeaky Jungle’ becomes hands-in-the-air piano house, briefly, in its final minute. Wider dance music culture may not be paying all that much attention to Guido these days, but perhaps it ought to be.