Bodybuilding drugs and a broken leg: How Gardland cooked up the white-hot improvised techno of Syndrome Syndrome 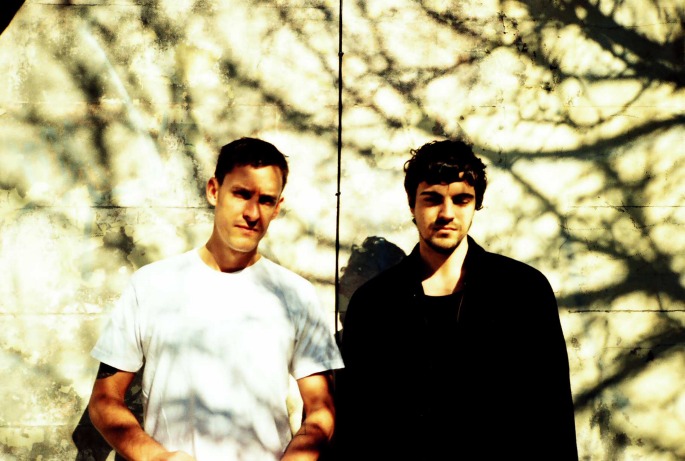 Syndrome Syndrome is the debut album by Gardland, two Sydney natives and former rock drummers who discovered the rough-hewn thrills of analogue techno just a few years ago.

This week Gardland were in London to perform one of their all-improvised sets at Corsica Studios, supporting fellow RVNG Intl. hardware enthusiasts Teengirl Fantasy and left-of-leftfield experimenter James Ferraro. FACT caught up with Alex Murray and Mark Smith before the show to find out how broken legs, stolen drum machines and advice from Russell Haswell all fuelled the creation of Syndrome Syndrome.

Rewind four years, and both Mark and Alex were drumming in rock bands. “But we both wanted to be in control of everything rather than playing drums and being stuck at the back,” says Mark. Then Alex broke his leg. “I was trying to make it work playing left-footed, so I ended up programming drums and that’s how I got into using Fruity Loops, Ableton and electronics. I don’t think I listened to much electronic music – it was just out of a necessity to start programming drums. That was four years ago, and my actual love of electronic music only came about in the last two years or so.”

Mark’s techno conversion came even later. “I listened to nothing but The Drones and Bob Dylan until about March last year,” he says. “I had lots of friends who were really into techno and I just didn’t get it – I was like, why is it doing the same thing all the time? And then it was like someone flicked a switch and everything with a guitar and someone singing it just seemed irrelevant.” Not that there was much of a techno scene to discover in their home city. “It’s like us and our friends and then some older people in Sydney, and that’s about it,” says Alex.

AN ENCOUNTER WITH TEENGIRL FANTASY

An early Gardland show at the end of last year saw them supporting Ohio duo and fellow analogue operators Teengirl Fantasy. “They really liked our set and they went back to New York and started telling people about it. Matt from RVNG Intl. must have been keeping tabs on what we were doing and he heard an improvised radio set we did,” explains Matt. “We didn’t even think it was that good,” says Alex. “And then he sent us an email and we were like, what’s this RVNG label? We hadn’t heard of it. But when I looked into it I was like, right, this is solid.”

Next year there are loose plans to turn that initial radio set into an EP for the label. “It’s super leftfield as well, because we didn’t expect anyone would be listening,” says Alex. “Some of the stuff is like post-club – like if the club was exploding. You can barely even hear the kick drum, it’s just like all this mid-range duelling noises,” adds Mark.

MAKING IT UP AS THEY GO ALONG

Just as the album is a collection of improvised wigouts, the live performances are made up on the spot as well. “We formed because we were jamming together, and I think we always wanted to play live because we couldn’t DJ,” says Alex. “When Mark brings in a particular sound, I know what kind of things I can do or which way I should progress. We don’t even really look at each other or communicate, we just know what should happen. Improvisation also gets better results, according to Mark: “We have to do it, it’s just the way we work best. Every time we try and prepare something it’s a lot worse.”

Everyone knows you can’t make proper techno unless you’ve experienced a proper bone-rattling soundsystem. “That’s been a really big realisation, hearing things on proper soundsystems in Europe. I wasn’t aware of how powerful it could be, and the energy it’s got within the sounds that you’re using,” says Mark. “Since being over here I’m so keen to getting back to writing things again, because I think we can do something a lot better and completely different.” They want to hear their own music played in clubs, they say, but reckon their deranged take on 4/4 might be “too questing” for a peak-time set.

The backbone of Gardland’s sound is the Dave Smith Tempest analogue drum machine, but halfway through making the album, Alex’s Tempest got stolen and Mark’s went missing. Unable to exactly recreate the sounds they’d stored on the old machines, they were spurred into a writing frenzy. “We had two or three weeks to go before the album was due,” says Alex, “so we got two new Tempests and most of the tracks we got rid of were the older ones. The tracks we kept were ones we did in one or two days when we really smashed them out.”

Their hardware-only set-up is fleshed out by a JoMoX Xbase09 and an MFB-522 – two machines designed to mimic the sounds of the classic Roland TR-909 and TR-808, respectively, and used by Gardland to anchor their more experimental instincts to the dancefloor. “We needed to hinge it down a little bit, because otherwise the sounds are not really codified as much. Using a sound which has a lineage and a history contextualises all the weird stuff a bit more,” says Mark. “But we definitely wouldn’t sacrifice weirdness for functionality.”

While their EP was recorded in isolation on Alex’s uncle’s farm in the remote outback, they made the album back home in Sydney: “We had the time and the space to do it every day for 10 to 12 hours and just smash it out in three weeks.” Writing sessions were workmanlike, fuelled by Vietnamese pork rolls and doses of the “semi-illegal” body-building supplement Mesomorph. “It makes you feel like you’re on cocaine, speed and about 500 coffees,” says Alex. “It’s so you can work out really hard, but we ended up just abusing it,” laughs Mark. “I’ve never even been in a gym.”

A conversation with noise provocateur Russell Haswell inspired them to a take an industrious, borderline nihilistic view of their work. “He had the same opinion as DJ Sprinkles [another Gardland role model] in that he said he wasn’t really born with a gift or anything, he’s just good at it and people want him to make this music, so he does it and gets paid for it,” explains Alex. “He sees it more as a job than necessarily a love or a gift.” Mark adds: “What did he call it, alchemy? It’s like turning shit into gold.”

Haswell also pointed them in the direction of British philosopher Nick Land, a major influence on the likes of Kode9 and cultural theorist Mark Fisher, AKA K-Punk. “Land’s theories on art are very nihilistic, there are no romantic notions,” says Alex. “It’s like getting the quasi-religious spiritual shit away from creating things. It’s just a hands-on thing which you do because you feel that need and it satisfies your ego in some way – we’re very much about just fucking doing it,” says Mark, “and not trying to think about any answer that surrounds that.”

Land’s idea that there shouldn’t be any historical context surrounding the production of the art was also an influence, says Alex. “We don’t want our stuff to sound like anyone else. Maybe it was a subliminal goal of ours, to create sounds that we hadn’t heard before and to be able to get that away from a purely experimental context and bring it into a club setting.” Mark agrees. “The edges are so blurry now – the dancefloor can just be a zone of experimentation.”