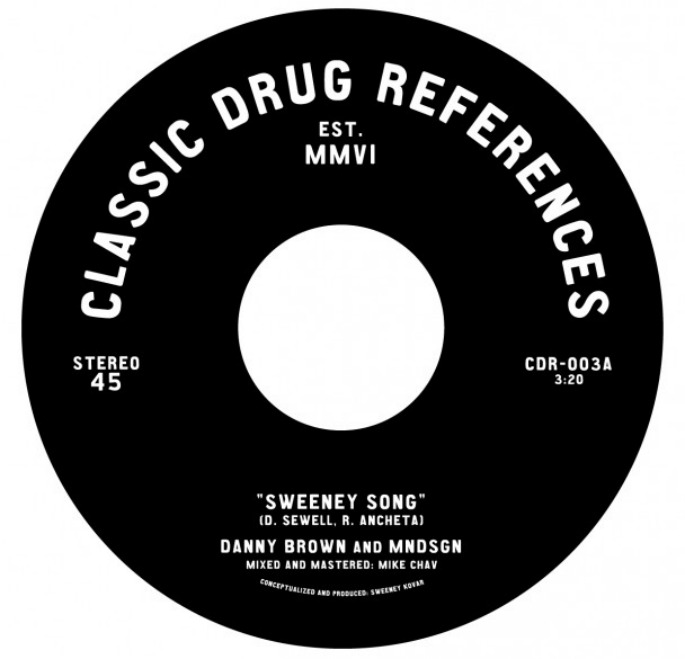 The Detroit headcase appears on a new collection of hip hop 7″s.

Classic Drug References Vol. 1 will contain three 7″ records plus a zine of writing, photos and interviews, while randomly selected orders will also receive their box customised with artwork from either Matt Andres, Ahnnu, Mndsgn, Safety First and Samiyam.

One of those cuts, titled ‘Sweeney Song’, pairs our favourite madcap rapper Danny Brown with a beat from Los Angeles producer Mndsgn. As Sweeney explains, he hadn’t expected to pin down the Detroit star:

“Danny was my longshot for this project. By the time I got moving on this he’d already signed with Fool’s Gold and was about to drop XXX, which would establish him as one of the fiercest MCs out. I emailed and DM’d to no avail. One day I decided to try something really crazy and picked up the phone and called him. The stars were aligned and a rapper actually answered his phone. In all of two minutes he agreed to cut a track. I emailed him a .zip of beats I’d culled from the homies and about a week later I got a sendspace link entitled “SWEENY SONG.” He had taken a Mndsgn beat and absolutely ripped it to shreds. It’s been so long since he cut it that it now sounds like vintage Danny to me, which of course I love. I fixed the typo in the title and ran with it.”

Stream that below and see a full tracklist underneath. Head to the Bandcamp page to pre-order the box set. [via Pitchfork]

If you haven’t seen it yet, Danny Brown’s cameo in the crazy new channel-flipping video for Bob Dylan’s ‘Like A Rolling Stone’ is an absolute must.