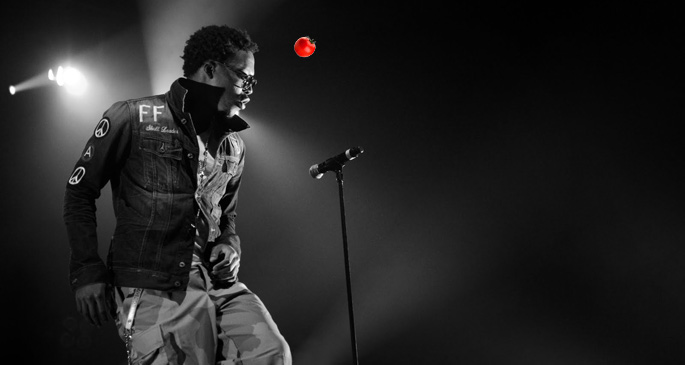 The Show Goes On?

Lupe Fiasco got a taste of the old-school in Salt Lake City recently when, as he was performing previews of his forthcoming album Tetsuo and Youth, a fan launched a tomato at him from the balcony.

Lupe instantly halted the show, and called out the expert hurler for her indiscretion. “I’m gonna finish the show, but if there’ more people like that I need them the f**k out of here,” exclaimed Lupe. “I know what she looks like – fat, white b***h. Find her.”

Fiasco then demanded the balcony area be evacuated, but the fans (who had no doubt paid for the privilege) responded by screaming that they wouldn’t leave. By the time the venue’s staff had managed to clear out the balcony, Fiasco had stormed off the stage, and the venue’s management had to apologize to the remaining fans and announce that the show was over.

The beleaguered rapper was instantly lambasted via Twitter for his actions and his choice of words, but he re-iterated, saying “I called her a ‘fat white bitch’ because she was a fat white bitch,” which we’re assuming didn’t help matters. You can see how the event goes down in the video below. [via AllHipHop]