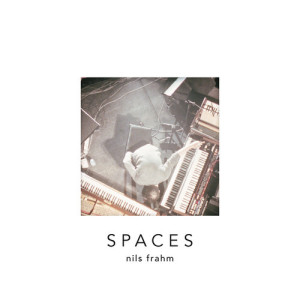 Nils Frahm’s recorded output in the last five or so years has included a couple of CDs on Sonic Pieces; Wintermusik, a gorgeous, intimate triptych of piano improvisations, and Felt, a series of compositions recorded in such a way as to afford equal prominence to the piano and the process of playing – the creak of Frahm’s stool and the intake of his breath. More recently, he’s released a synth EP and Screws, an album recorded in the wake of a potentially career-ending thumb injury. But anyone who’s seen Frahm live will understand that his records are only half of the story. His sets are miniature revelations that leave audiences awed, aware they’re in the presence of rare genius.

Spaces, Frahm’s latest full-length for Erased Tapes, is an interesting culmination of the last few years of recording and touring. It’s not a new LP as such, as it contains both new and old pieces; nor is it a live album proper, even though it’s made up of live recordings made in performance spaces around the world. It falls somewhere in between, more like a topography of Frahm’s career. Where Screws was – necessarily, given Frahm’s injury – spare, Spaces is unfettered, with compositions given free rein to roll in every direction. Even though it was recorded over two years, Spaces’ sequencing makes it appear as if Frahm is engaged in constant dialogue with both his audience and the performance space. The opening track ‘An Aborted Beginning’ is bleak and dramatic, a far cry from most of Frahm’s recorded work. Its synth and percussion tail off into nothingness, and the feedback of the audience – restrained applause – seems to spur Frahm into playing something more beautiful. ‘Says’, the next piece, interweaves piano and synth figures into something so stirring it borders on the sublime. The audience responds in kind – rapturously. ‘Hammers’, another new piece, is a delight, all bravura arpeggios and a bass melody played forte, and ‘For’, a twinkling synth composition on record, is reinterpreted live as into a portentous, panoramic piece.

No less affecting, are ‘Familiar’, ‘Went Missing’ and a medley of ‘Unter’, ‘Tristana’ and ‘Ambre’, played piano and with the audience’s response left off the recording, so that the impression is not of Frahm playing in a public space but rather of him letting you listen in to a private session. The Reichian ‘Said and Done’, from The Bells, is a highlight, Frahm’s one-note figure lasting a full minute and a half before he plays a single chord. He extends the three-minute original to over nine minutes. Where the album version is restrained, here ‘Said and Done’ is moodily cinematic, with additional swirling figures and countermelodies underpinned by that single note, growing in intensity with each repetition.

In concert, Frahm tempers his virtuosity with humour. You wouldn’t find the unromantically titled rhythmic interlude ‘Toilet Brushes’, on which he knocks on his piano strings with a toilet brush, on a studio release, but it’s as captivating as any of the melodic pieces. The title of ‘Improvisation for Coughs and a Cell Phone’ is a wry nod to a less-than-ideal audience that conveys Frahm’s personality as well as the atmosphere, ringtones and all, of his performances. That’s the achievement of Spaces: not simply to replicate the music of Frahm’s concerts, divine though it is, but to evoke the events’ communal intimacy.