“So deep in the painting that you can’t see the frame”: NYC experimenter Bryce Hackford on immersion, improvisation and hatred of MIDI 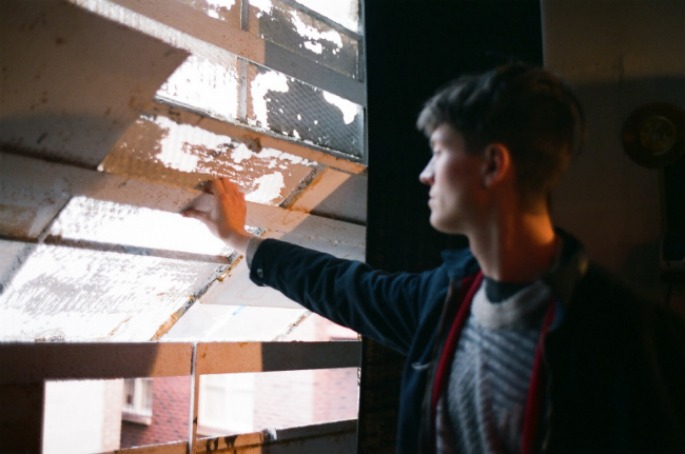 On his quietly stunning debut album Fair, which emerges on new Moshi Moshi offshoot PRAH Recordings on December 9, you’ll find music for heavy-lidded dancing, music that engulfs you in its slowly mutating figures and fierce washes of tape hiss, and, on two extensive, almost half-hour-long pieces, music that burrows deep between your ears, near eroding your sense of time and forward motion.

Born in Long Island, Hackford has lived in New York City for more than a decade, most recently in his own studio in Williamsburg. As well as putting his record collecting habit to use as a DJ, he’s released a handful of cassettes as a solo artist and is attached to various other projects, including the improvisational duo Pearl Necklace, who last year released an LP on Oslo experimental label Smalltown Supersound.

Fair compiles six of Hackford’s recordings made over the past six years, spanning mucky, decomposed techno (of the kind honed by his friends on label-of-the-moment L.I.E.S.) to immersive, freeform meditations with roots in ambient, noise and new age music. Connecting the dots between the downtown scene of the ’70s and ’80s (Arthur Russell, Rhys Chatham) and the city’s recent renaissance in visceral, off-kilter techno shapes, the near double-length album is a deep listen that feels both reverent of its lineage and happily spontaneous.

FACT gave Hackford a call at his home in Williamsburg to find out more about “immersive aesthetics”, his hatred of MIDI, dance music conservatism and the increasing difficulty of being a musician in New York City.

Most of the album is taken up by two tracks, ‘Run On Cirrus’ and ‘Modern Propeller Music’, which are very intense and meditative and last almost an hour altogether. What draws you towards working in these long timeframes?

I’m interested in immersive aesthetics I think – ambient music and installation music, long music, drone, new age, all of that kind of stuff – and with dance music, like the techno track [‘Another Fantasy’], there’s a correlative there that I think is really obvious. It’s about this immersive situation where you’re so deep in the painting that you can’t see the frame.

So that immersion is something you’ve consciously tried to create, especially on those last two tracks?

Well, the last one [‘Modern Propeller Music’] I recorded in 2007, and the one before that probably 2010. I have a lot of abstract ideas about what I’m interested in and where I’m going, but when it comes to actually making recordings it’s more about immersing myself in the materials and the interaction itself. So whilst I do have a general interest in, let’s say, an idea like ambient music or healing music, the piece always goes some place more complex and interesting than what the general idea was. I think I was definitely listening to a lot of ambient records when I made that last track.

That one was made with guitar and tape loops right?

It’s just a cassette tape recorder with an electric guitar and an FX chain.

But it doesn’t really sound anything like a guitar, it sounds like it could all be electronic.

For a long time I was working really hard to try and put a mask on the guitar, because it’s a nice tool and I’m probably more dextrous on the guitar than any other instrument. I was making a lot of recordings on it when I was living in Harlem. That was the name of the game, trying to make it sound like it wasn’t a guitar.

On the other hand the opening track, ‘Another Fantasy’, is quite different – it’s obviously techno influenced and it has a really grubby, homemade sound to it. What tools were you working with on that one?

I’m really drawn towards analogue technology, tape and vinyl, but I also work with digital gear. I’m way more interested in instruments than computers. I like to make the amount of time I stare at a computer screen minimal because I don’t think it’s that good for me. So I’m using a sampler, drum machine and synthesisers, all of that stuff.

In some ways Fair is a dance record, but there are lots of elements in there that suggest a much broader set of influences – I can detect Arthur Russell, particularly on ‘Heart To Beat’, and perhaps Glenn Branca too with the guitar experiments on ‘Modern Propeller Music’. Do you see yourself in that kind of downtown NYC lineage?

Definitely, I mean all of that stuff is really big for me. Arthur Russell’s work is really important to me and I actually performed with Rhys Chatham too, and he and Glenn Branca are often compared. I had some friends who were involved in doing it and he needed 200 guitar players. It was a really beautiful experience actually, just because of the incredible mass of sound in the space – it was at this park in Lincoln Center, very physically overwhelming and euphoric.

Some of the material on the record dates back quite a few years – the guitar piece is from 2007. So what are you working on now?

I’ve just started to really bite into performing live by myself again. Just recently I’ve got a new set-up and I’m getting ready to play some more shows. I’ve been working on a lot of strange dance music.

In what way strange?

Well, for one thing I’m not really interested in MIDI, and that’s something that has sort of defined dance music since the disco era. It totally allows you to mechanise things, and I can see why it’s convenient and helpful but pretty much all of my work at this point is improvisational, and the interaction with MIDI, just conceptually… it doesn’t appeal to me as a metaphysical situation, you know what I mean?

So does your live performance focus on improvisation rather than what we can hear on the record?

Yeah. I will visit themes and samples and things that are on my records, but I’m not going to show up and play the songs.

It seems as though improvisation is something that dance music producers are becoming increasingly interested in lately. There’s a need for more spontaneity.

It really depends where you’re coming from. I wasn’t born in a disco, I haven’t been listening to that music my whole life or anything but I am pretty invested in it, and most people that are invested in it are really invested in the history of it, and this absurdly conservative approach to doing things quote-unquote ‘right’. So that’s a pretty boring normative situation. And then you have noise music and stuff like that, which was really big here five years ago, where total chaos is what it’s all about, and obviously every set is improvised and unique and there’s just a generally experimental approach.

What’s the outlook for musicians in New York right now? Artists can’t even afford to live in some bits of Brooklyn anymore, so how do you think that’s affecting the music scene? And you’ve got a new mayor too.

You know, it’s very interesting, I went to a party that DJ Harvey played recently that was meant to be a proper warehouse party, advertised as guaranteed to go until 9 or 10am. The party started at midnight and Harvey was going to play all night. And the cops came and broke up that party and four other parties in the neighbourhood around 4am. And this was in the heart of Bushwick, so you know, we’re all kind of curious about what having a new mayor is going to mean. Friends of mine who are a few years older have talked to me about the way that the city changed when [former Mayor Rudy] Giuliani moved in, and really in a lot of ways that spells a lot of trouble. But I think this is something that’s been in the air a long time, this question of how artists are supposed to live in New York City. And it’s sad because you know, it’s one type of progress – even David Byrne just recently wrote an article about it – it’s gonna become an increasingly less relevant dialogue because it’s going to become more monochromatic.

Do you think people will go elsewhere? I’ve heard people talk about moving to places like Detroit and other semi-abandoned places in order to have cheap space to live and work in.

There’s something really interesting to me about places like Detroit, and it’s sort of mysterious because I’ve never really spent any time there. But I think at this point in my life I’m not really interested in trying to start the next wave somewhere. I think some people in Detroit are doing really cool things, rehabilitating it, and also in New Orleans, another place out here that’s getting that kind of love. I would love to go those places but I don’t like the idea of trying to be the next wave of some scene or something. New York is still, well  – there’s a lot that goes on here, I’m surrounded by people that are doing cool things.