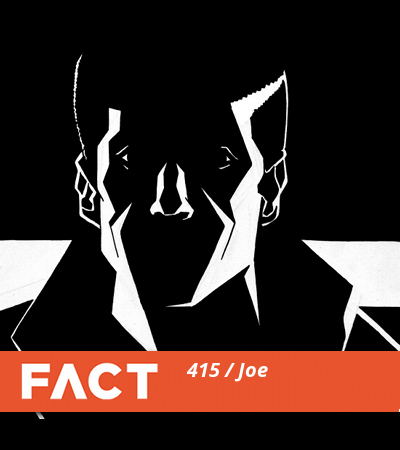 He doesn’t do much else: since debuting on Hessle Audio with 2009’s sublime ‘Grimelight’, the London-based producer has quietly carved out one of the most impressive discographies in dubstep (or, at least, what used to be dubstep), giving few interviews along the way – though it’s worth checking him and Call Super’s recent chat for FACT. Seven releases in four years is hardly prolific, but Joe’s strike rate is one of the best around, constantly kicking against the boundaries of what dance music’s supposed to be without ever losing sight of what makes clubs tick. Take 2010’s ‘Claptrap’, for instance, a DJ tool that’s nothing more than claps and a kicks but proved to be one of the year’s most grin-enducing dance tracks, released several years before 2012/13’s drum track trend.

As a DJ, Joe takes a similar approach, often warming up clubs with long passages of jazz and soul. In the hands of most, it would be enough to make punters run to the bar and never come back, but Joe has a way with – and a clear passion for – these records that makes them work as dance music. His FACT mix starts in a similar vein, opening with tracks from Motown, Westbound and Philadelphia International before melting into house from Theo Parrish, MM / KM, Wbeeza, Jay Daniel and more. Also watch out for two recent Joe cuts – ‘Punters Step Out’, released this month on Hemlock, and ‘Slope’, released earlier this year on Hessle Audio – and scattered field recordings of London.

No tracklist, but feel free to hit Joe up on Twitter for IDs.