Surrender to the Fantasy 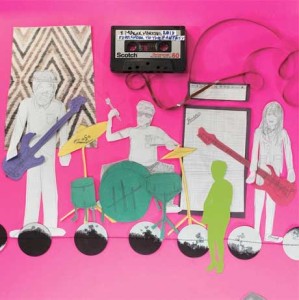 Even though Magik Markers have put out more than 50 releases, including 28 studio albums, in over a decade, it’s only in the last few years that they’ve focused on proper songs. The group’s blistering brand of noise-rock works perfectly in a live setting, but their sprawling approach doesn’t always translate well to record. Perhaps that’s why, since around 2007’s BOSS, the trio’s albums have become increasingly melodic and song-oriented. Surrender to the Fantasy, their first album in four years, is their most melodic yet. It’s a logical continuation from 2009’s Balf Quarry, but compare Surrender To the Fantasy to the brutal 2004 album I Trust My Guitar Etc., and Magik Markers’ evolution from spontaneous noisemakers to songwriters is clear.

The increased emphasis on songs doesn’t come at the expense of the band’s strengths: fuzzy swathes of noise, raw vigour, Peter Nolan’s no-nonsense drums, and Elisa Ambroglio’s narcotised singing voice. On ‘Crebs’ she sounds almost fragile in the web of noise, but never overpowered as she sings, “Everything about me feels so free”. The noise swells but it’s still relatively subtle, petering out after a rich squall. The supercharged ‘Bonfire’ careens forward on the back of Nolan’s rushing drums and a crunchy riff, Ambroglio’s voice mangled amid a mesh of feedback.

Elsewhere, Magik Markers are surprisingly restrained. ‘Young’ is lovely, a sparse and wistful song of acoustic guitar, cello and Ambroglio singing, “No use in wondering what might have been”. She’s also on top form on the lonely, Americana-tinged ‘Acts of Desperation’, her lyrics – “These acts of desperation pay” – typically bare-bones but nonetheless affecting alongside bluesy guitar licks and dull kickdrum thud. ‘WT’ is dismal and drugged-sounding, with gritty slabs of distortion and strung-out, almost unintelligible vocals, but the album’s centrepiece and clear highlight is ‘American Sphinx Face’. The guitar and bass lines wend tentatively before gathering steam into a freeform whirlwind. Ambroglio deadpans, “You can’t take me / I’m an American” and “In America every man’s a king / Not a good king but a dead king… History judges what it sees”. Her barbed lyrics and impassioned spoken tone give weight to the Patti Smith comparisons, though her ability to vacillate between the styles of ‘American Sphinx Face’ and ‘Young’ point to a personal style she’s refined over the years.

Surrender to the Fantasy is undoubtedly good, but occasionally falls short of its potential: ‘Mirrorless’ is lo-fi and loping, but washes over you ineffectually after a few listens; ‘Empire Building’ is too stupefied to really go anywhere, and ‘Screams of Birds and Girls’ is more etiolated than its title suggests. Still, Magik Markers sound as confident as ever, and though Surrender to the Fantasy might not be their most accomplished album yet, its best moments are highlights in a career not short on them.