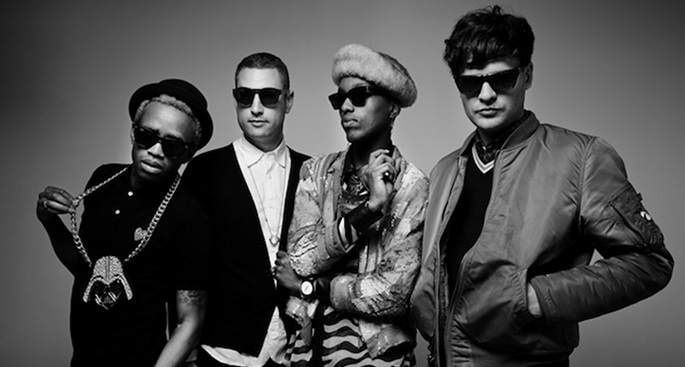 Niall Connolly is a UK-based producer and writer who releases music under the name CVNT. He’s also co-founder of the queer collective Tranachy, and hosts vogue/drag balls across the UK. He was at Manchester’s Warehouse Project for the last UK show by Azari & III, a Canadian group whose take on house music not only draws from the sounds of classic Chicago, but also the “marginalised black / gay club” culture at house music’s roots.

And like that they’re gone, just as quickly as they’d arrived.

Four years ago a little single called ‘Hungry For The Power’ dropped on Cosmo Vitelli’s I’m A Cliche label in Paris. With its accompanying video of a psychotic business man, a dominatrix prostitute and some cannibal voguers, the world was introduced to Azari & III. It was as exciting a debut single as has been released since. And then, just under one month ago, via their Facebook page, it was announced that the group would be breaking up after fulfilling their current live engagements. This included a live set at Manchester’s Warehouse Project, a show that would mark the band’s last ever appearance in the UK.

A lot can happen in four years, and in the case of Azari & III, an entire “house music revival” has sprung up, a revival that the band must take some credit for inspiring. Although consumers, DJs and fans of house music would argue – this writer included – that the genre never went away, it’s hard to deny the impact of Azari & III on dance music in general. Through the presence and vocals of front men Starving Yet Full and Fritz Helder, we were reminded of house music’s roots in underground, marginalised, black / gay clubs, and through the production of Dinamo Azari and Alixander III we were reminded that dance music could be sensual and sexy, something that was desperately needed in the era of stadium EDM, aggressive trap-pop and sexless brostep.

Manchester’s Warehouse Project takes place in a massive, impersonal aircraft hanger of a space, whose size dictates that its programme be announced months in advance to maximise buzz and to give punters a chance to buy tickets for individual nights. WHP regularly sells out in advance, as was the case with this night, Heidi presents the Jackathon, which also featured sets from house favourites like Cajmere, Kerri Chandler, Jackmaster and Hot Since 82. But selling out so far in advance also meant that Azari & III’s last ever UK show would be merely a footnote, as a single part of a much larger bill, and quite likely to be missed by many of their more hardcore fans.

So it was with trepidation that I approached WHP: this club is truly vast, with capacity for an intimidating number of people (not that these punters were any trouble, mind you – it’s just their sheer number) and I wondered how Azari & III’s sound would go down in a main room that holds thousands, and whether their stage presence would come across. I shouldn’t have worried. Both Helder and Starving Yet Full gave their all, running across the huge stage, getting into the audience (literally), voguing, posing, and never once letting their vocal power, the cornerstone of Azari & III’s sound, slip.

As the lights went down before they took to the stage, there was a reassuring cheer from the crowd. And as they bounded on to the opening bars of ‘Hungry For The Power’, the applause and the recognition grew stronger. Helder and Full were positioned in front of a huge bank of glowing, sparkling, LEDs while behind it Azari (minus III) was busy tweaking knobs.

With the beats of ‘Hungry…’ booming out across the huge PA, Starving Yet Full’s vocal carved out its own definite space in the mix, ably helped by Helder’s baritone growling. As well as being a huge visual hook in the band’s appeal, Helder’s stage presence, that of a hyperactive dynamo doing his utmost to connect with the crowd, helped set this live show apart, leaving room for Full to concentrate on belting out the gorgeous lead vox. Both front men ooze charisma and sex appeal, both stripping down to bare chests during the set, Full managing to do so without removing his Russian military-style fur hat. Impressive!

It’s to the band’s huge credit that Azari & III played for a full hour, and not once did the energy dip. Cheers rang out for club hits like ‘Manic’ and (especially) ‘Reckless With Your Love’, both of which seemed extended for the set and with little lost in translation from small club soundsystems to this mammoth PA. ‘Lost In Time’ and ‘Into The Night’ both benefitted from a slight beefing up, getting fists and arms pumping without jettisoning the tracks’ charm and melodic beauty.

It’s weird now to be referring to Azari & III in the past tense. With the likes of Disclosure taking up so much of our airwaves in the past 12 months, it seemed like another Azari & III album would be a shoe-in, and if it was anywhere near as good as the first one, then commercial success was a given. Jesus, if it can work for Morgan Geist – of all people! – then it can work for these guys, right? Azari & III delivered more than just a run of great club singles – they really were that rare anomaly in dance music: a functioning band, with every member playing their role to the hilt, bringing the whole together to make more than its parts. These guys have charisma to burn, not to mention enough raw talent that there would have been no need to hit up Azealia or Rita for some redundant “guest appearance”.

It seemed I wasn’t alone in recognising the importance of this gig. Although Starving yet Full mentioned it on the mic a couple of times, most of the crowd seemed happy to simply dance along to this last-ever UK set, but during the instrumental track ‘infiniti’, presumably when Helder and Full were due to take a breather, Helder reappeared on stage to console one visibly upset fan in the front row. “My friend, why are you crying? Don’t worry, we’re not dying or anything… we’re just very tired…”

Not that you would have known from this show. After dancing in the crowd, both front men returned to pace the stage and deliver the last run of songs with 110% commitment, ending with a pumping take on ‘Reckless With Your Love’ and a final, salutary version of Adonis’ all-time Chicago classic ‘No Way Back’. With the crowd dancing their asses off, the stage descended into pitch blackness and the music dissolved into a droning feedback loop. In the darkness the band exited the stage. And with that, Azari & III were no more.