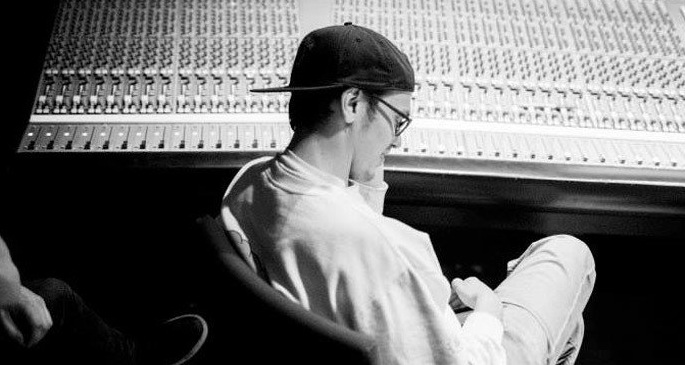 “This album is hands down one of the most beautifully put together albums i’ve heard in my adult life. One look at the artwork and you know what you’re about to get into. The album to me felt like a dissociative trip into a world of unknown colors and moods. He works minimally within the space he creates by using delicate but intense strokes of unique and foreign sounds, and at times just creating a wall of sound to wash the canvas clean for the next track or idea. If you don’t check this album out you’re doing yourself a dis-favor. If i had the dough I’d buy everyone I know a copy.”

I first caught wind of Aerotropolis via the video promotion for ‘Mr. Cake’. The video is absolutely the world I pictured aerotropolis to exist in. The album feels like a late ’90s video game soundtrack, and instead of a futuristic world, it comes across as an alternate world altogether. Feeling like a tropical album at points the temperature of the album is hot and the sun is shining; although at times there are sudden switches in moods that keep her grounded in her hometown’s forecast of a tense grimy overcast.

I think Ikonika has really taken her time with her craft and it has paid off immensely. This is a high point in her career.”

Another perfect example of artwork resembling perfectly the music inside. The album is indeed cold and sparse. It reminds me at points of what Art Of Noise might sound like today or what Untold would have sounded like if he had kept down the path he started 2009 with cut’s like ‘Kingdom’ It feels like you’ve been taken to the other side of the universe and just dropped off. Everything feels beautifully alien.

My favorite part of the album lies in the cross-over feel. You can hear the grime and DJ tool aesthetic oozing through; sparse backgrounds littered with grime sample packs and bass swells. Cold Mission has a nice way of testing your patience, you’ve got to stick with it and listen to the whole thing to get a feel for what he’s trying to accomplish. Space is the new frontier and Logos is waiting at the finish line.

“My favorite EP of the year, and not just because it’s on Embassy but because the music on the release is just so timeless, and I feel it was created with that in mind. The release’s tracklisting is a nod to early ’90s rave music. Often releases would have two sides of music that were so different from one another and it’s pretty clear today that the reasoning was rooted in experimentation. This release mimics that idea. Check out any local record stores used dance vinyl bin and you’ll get an idea.

Wheez-ie’s side is filled with guaranteed club smashing tracks. Five Finger Salute pay’s homage to baltimore club with cinematic transition fx, repetitive vocal hooks and rolling percussion. He leaves his signature mark on the track with his ominous fx and creepy breakdown. The flipside is an acid smasher that just builds and builds and builds leaving a breath of fresh air in between only to come back swinging even harder with more percussion layers.

Moldy’s lead off tune ‘All I Want’ is a dub-war anthem that we came across in 2009/2010 when we saw video of him playing it live at Dub-war in NYC. It’s really beautifully done. Another tense track that continues to build and swell around a vocal hook and then finally relieves itself by what sounds like a jazz ensemble from another planet. I just can’t imagine this tune not standing the test of time, it’s so classy and I was really proud to be the one to put it out.”

“This is a really under-rated gem right here from a somewhat unknown ‘Bintus’ aka Milo Smee of Chrome Hoof. Power Vacuum releases some quality throwback style acid and techno tunes and a constant direction with their releases, this being a clear example. Bintus’ stuff is overly mechanical and sits in an unknown world of mystique.

Quite possibly the main reason I initially went back and listened to this record over and over is because of the track ‘Basket Case’. It just arouses a very awkward feeling and I love it. Whereas most acid might be called ‘acid’ because of an instrument, I truly believe this track is what goes on inside your head when you’re on acid. It’s chaos. A beautiful and chaotic record everyone should have in their collection.”

“No words. Just go buy this. I’ll refund your money if you don’t like it. But seriously this album is too beautiful not to like. Eerily haunting and engulfing. Sit on your floor, turn off the lights, listen to this one.”