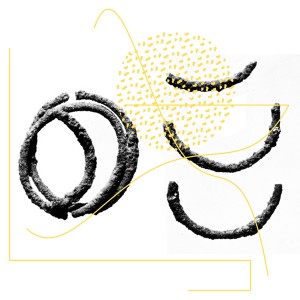 On his second record for PAN, Jar Moff still walks the Brötzmann-esque tightrope between taut composition and sonic mayhem, and retains much of Commercial Mouth’s caustic, harsh palette. But Financial Glam is in many respects more tightly focused – and all the better for it. Again, Moff stitches together samples into an intricate, swampy patchwork, but even though the tracks are almost twice as long as Commercial Mouth’s, with the attendant greater scope for chaos, his attention to narrative detail is further refined.

The mystery of the provenance of Moff’s samples, and where one begins and the other ends, only deepens with repeated listening. Wisps of the human voice, or something like it, are detectable in the mulch, along with orchestral snippets and bitcrushed synths and feedback, but prising them apart feels futile. The first piece, ‘Financial Glam’, expands forwards and outwards, its ominous synth rumble and clattering, crunching rhythm coupled with tissue-thin swathes of noise. A wonderful sound like a time-stretched mosquito intersects with the amorphous scrape, at times spiralling high above the morass, at others deeply embedded in it.

Moff’s dynamic range provides the thrust for much of Financial Glam’s unsettling qualities. ‘Kresentosiagona’ (which means “crescendo of the jaw”, perhaps the logical conclusion for the “commercial mouth”) more than lives up to its name. Moff assembles orchestral samples into a bizarre soup, adding new elements at each pass: a bagpipe wail; the shatter of glass marking broken time; and strings and synths that sound as though they’ve been put through a mangle. This compelling lattice of sounds increases in intensity and volume before dropping off, allowing lone piano keys and whooshes of static to echo in empty space before they’re joined by brass figures, and the sound swells once again into a free-jazz cacophony. Sometimes the most compelling moments are the quiet ones, such as around eight minutes into the title track, where cello scrapes and snippets of strings are layered into a frantic, jostling collage. Though ‘Financial Glam’ builds inexorably to a harsh climax its closing six minutes, despite being far quieter, are among its most abrasive.

For all its chaos and jarring contrasts, Financial Glam never sounds abstract. Instead it sounds purposeful, a quality born from Moff’s knack for composition, and one that bears out the record’s overarching narrative theme. The text accompanying the release describes Financial Glam as reflecting “the flux and tension” of Moff’s home city of Athens. Be that as it may, it will resonate strongly with anyone who’s witnessed the effects of the last six years of recession, from the collective malaise of chronic unemployment to governments’ heightened intrusion, and the debasement and vilification of poor and vulnerable people. It reeks of a uniquely urban, post-recession dystopia, its desolated sonics and titles alluding to the fallout that follows hubris, a rot from within that’s manifest in crumbling buildings and ineffectual state institutions. As such, Financial Glam is not just a sonic thrill, but also a meditation on one of the most depressing points in a great city’s history.