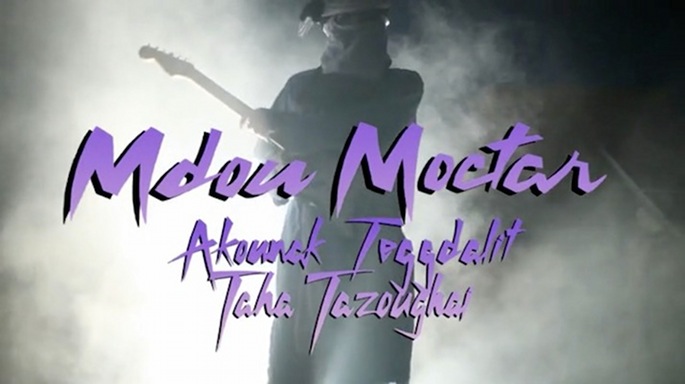 Sahel Sounds are diligent and effective archivers of West African records that tend not to have caused much of a ripple outside of the region – indeed, their reissue of Mamman Sani Abdullaye hypnotic 1978 cassette La Musique Électronique du Niger was a hidden gem that only narrowly missed out on a place in our best reissues of 2013 list. Their latest project is their most eyebrow-raising yet: a feature-length sort-of-remake of Prince’s 1984 film Purple Rain, set amidst Niger’s Tuareg community.

Shot with a local cast and crew in Agadez, Akounak Tedalat Taha Tazoughai follows Tuareg guitarist Mdou Moctar – a successful local musician in his own right, who featured on the label’s ace Music From Saharan Cellphones compilation – as he quests to succeed in the region’s music scene and win the affections of his paramour. As the film’s promo trailer shows, 1972 cinematic classic The Harder They Come is also an explicit touchstone throughout. Rather brilliantly, the title translates as “Rain the Color of Blue with a little Red in it.”

According to Sahel Sounds, the film is “based on the universal hero, the struggle of a musician to overcome a series of conflicts. In execution, many techniques have been adapted from the Poverty Row, Italian Neo-Realism, and the experimental films of Jean Rouch, in particular Moi, Un Noir.” Plenty of in-concert footage is also promised throughout.

A Kickstarter page has been set up to raise funds for the film, which has yet to be shot. At the time of writing, it looks like the team have just nudged over their target, but you can still head here to contribute. You can watch the trailer below.