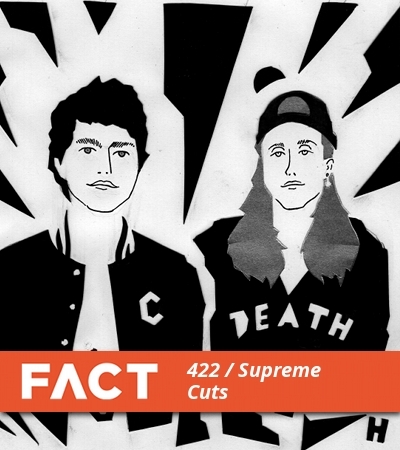 Since 2011, Chicago duo Supreme Cuts have been mangling hip-hop, dance music and more into a unique stormcloud, collaborating with the likes of Haleek Maul, Mykki Blanco and Main Attrakionz in the process.

The group’s album Whispers in the Dark made it into our best albums of 2012, while Chrome Lips, a full length collaboration with Haleek Maul, saw the two parties egg each other on into dark, dangerous places. “We started at the same level: him as an aspiring rapper and us trying to get more into making beats. It was interesting to see how that all panned out over the span of a year”, the group’s Mike Perry told FACT in 2012.

The group’s latest album, Divine Ecstasy, ups the quota of guest appearances (The GTW, Shy Girls, Poliça’s Channy and more feature) and finds the duo on more subtle form: no longer reliant on the vocal chop-ups of Whispers in the Dark, it instantly feels like an album with more longevity – no sophomore slump here. Today, they toast its release with a session for FACT.

More a mixtape than a mix (you know what we mean), FACT mix 422 is almost 100% Supreme Cuts productions, ranging from jeep-tooled hip-hop to manic drum’n’bass, and comes hosted by David Ashley and Yungcuhlord. We’ve never run a mix quite like it.