“Don’t call me anything, call me everything”: Baltimore club mystic Blaqstarr on his return to the music world 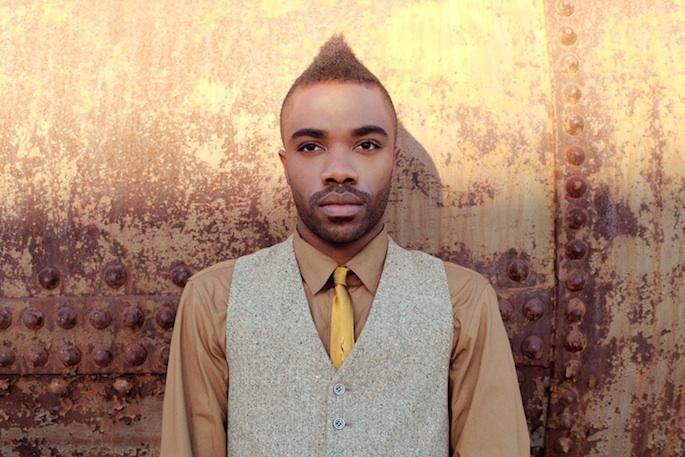 Blaqstarr was one of the most exciting innovators to emerge from Baltimore’s club music scene — and then he seemingly disappeared.

The man born Charles Smith had already been DJing and producing in his hometown for a handful of years — dropping local favorites like ‘Get My Gun’, ‘Tote It’ and ‘Rider Girl’ — when trendspotters Diplo and M.I.A. came calling in the mid-00s. In the years that followed, he signed with Diplo’s Mad Decent label, produced tracks on two of M.I.A.’s albums, and teamed with teenage protege Rye Rye for instant classic ‘Shake It To The Ground’, building buzz along the way.

In 2011, he released the Divine EP, which found his stripped-down Bmore beats pushed into service of Auto-Tuned, weirdo-R&B; a self-titled mixtape released later that year would prove to be even more eclectic. Out of Baltimore and living in Los Angeles, he inked a deal with M.I.A.’s Interscope-subdivision N.E.E.T. Recordings. It seemed like Blaqstarr would finally be heard by a larger audience, but a planned LP entitled She Is Love never materialized. For a while, neither did anything else.

That changed last September, when Blaqstarr popped up on Soundcloud with a mixtape as genre-hopping as his self-titled tape (or his FACT mix, for that matter). A few breakbeat-heavy club creations followed, and he literally announced his return with ‘This Is Me’: “tell ‘em in the building / this is me.” A reunion with Mad Decent, to release a volume of mastered and mixed versions of early club hits like ‘Hands Up Thumbs Down’, confirmed what we already knew: Blaqstarr was back.

“The more you let your spirit guide you, the more you are capable of doing.”

Again living in Baltimore, Blaqstarr was — considering his hermetic reputation — pretty easy to reach out to and arrange an interview with. Meeting the sharply-dressed and soft-spoken musician at a Baltimore coffeeshop, what quickly became apparent is that questions about label politics and release dates were not the order of the day. Blaqstarr is best described as spiritual, but not in a cloying way, with a mystic-hippie worldview that would be pretentious if not for his complete earnestness.

Asking for a recap of the last few years results in an oblique answer that sets the tone of our discussion: “Absorbing and incorporating inspirations at every step of the way through life… The seasoning process which contributes to the ultimate project,” he says. “Being open to and mastering every angle” — be it DJing, producing, writing, or singing — is part of “the beauty and the divine of the evolution of everything.” Heady stuff, no doubt.

Blaqstarr attributes his spiritual outlook to his father, a heavy reader who exposed him to everything from The Autobiography of Malcolm X to East of Eden — as long as it was about personal strength and overcoming adversity. Blaqstarr picked up where his father left off, delving into more metaphysical matters. “The more spiritual you are or the more you let your spirit guide you, the more you are capable of doing,” he maintains.

At this point, Blaqstarr played me a rough draft of a new song, ‘The River’, that shows what being “a spirit with a body” means for his musical process. Comprised of little more than a simple backbeat, a lilting guitar melody, and him singing a pleading “dam(n), don’t stop the river” refrain, the song eventually sees him rapping (or as he describes it, “expressing myself lyrically to the rhythm”) at a high clip, almost like vintage Andre 3000.

“Where I’m at artistically is like 20 years ahead of where things are right now.”

A glimpse behind his writing process proves fascinating. Rather than writing lyrics, he lays down a vocal sketch that he describes as “the spirit talking,” a mumble-like track which he then plays on repeat until he can “decode” the lyrics within it. He loads Live to show me an example, and he’s right: it sounds like a verbal rhythm track of wordless syllables and sounds, but played at the same time as the finished product, the resulting lyrics and “the spirit” match up almost perfectly.

While it’s unclear when (or if) this song will see the light of day, it doesn’t seem that the constant demand for new material bothers him. “It’s always a process,” he explains. “When certain things come out, it comes out in small pieces, because it’s still gathering. It’s like peeking my head up, saying ‘here’s a little bit.’” The first “little bit” is the Blaq-Files EP, which was an idea that came from a conversation between his brother and Diplo. It made sense to Blaqstarr to release these “lost tracks,” some dating back to 2002, because they’re “still new to the whole world.”

The EP is also just the first step in what sounds like a return to a traditional release schedule, albeit with his own big picture thinking. “[With the EP] I’m welcoming the world to the beginning. Where I’m at artistically is like 20 years ahead of where things are right now,” he explains. “I’m giving them what they want right now, with classic tracks. That’ll let me feed them what’s along the way [to new material].”

Asked what’s next after the EP, Blaqstarr promises that his next project will be “the fusion of everything: past, present, future. I’m giving ‘em the holy trinity,” combining his forays into Baltimore club, off-kilter R&B, and whatever else he’s been up to. He’s been watching classic James Brown performances, and listening to a lot of “instrumental bass music,” everything from masked trap producer UZ to another elusive artist, Tri Angle’s Balam Acab. He deflects a question about labels and schedules, but seems open for anything: “Right now, I’m not shutting down options. I don’t want to use the words ‘not’ or ‘no’ or ‘negative’.”

He then plays me the ersatz, Gothika-sampling video for another unreleased track, a haunting, Eastern-tinged number that has some noise and grit to it. Co-produced with fellow Baltimore talent Don Trunk, Blaqstarr sings “I’m not your lover / I’m not your friend / I am something that you’ll never comprehend.” It’s a lyric borrowed from Prince’s ‘I Would Die 4 U’, Blaqstarr’s favorite song, which he recalls first hearing as a child: “I wasn’t comprehending the lyrics, I was just going off the melody and how it comes in with just the hi-hats. It comes in real naked, and then it gets dressed by the end.”

Blaqstarr insists that there’s “a heavy Baltimore spirit” in both tracks, and even if they don’t follow the traditions of the breakbeat-favoring genre, he still finds inspiration in the “essence” of Baltimore club music. “When I was younger, listening to club tapes, I liked it and I felt like I could do this,” he recalls. “It’s so simple, but so lovable. You had your Prince and Michael Jackson songs, but club music was something different, like, ‘whoa – are they supposed to be making music like this!?’”

The type of underground interest that first elevated Baltimore club to global prominence five years ago seems to be resurgent: its descendant Jersey club sound is in the spotlight, the music of labels like Fade to Mind and Body High has a club streak to it, and the Night Slugs re-release of KW Griff’s club classic ‘Bring in the Katz’ was a major co-sign. Blaqstarr names Mighty Mark, TT the Artist, and longtime collaborator Rye Rye as artists to watch in the city, but he’s also “been coming across a lot of organic, out-of-the-blue, cosmic talents.” So will Baltimore club’s second moment be more long-lasting than its first? “Now is the time to bring a blanket of light and wrap it around the whole world,” he says. “I don’t think it’s letting up after this.”